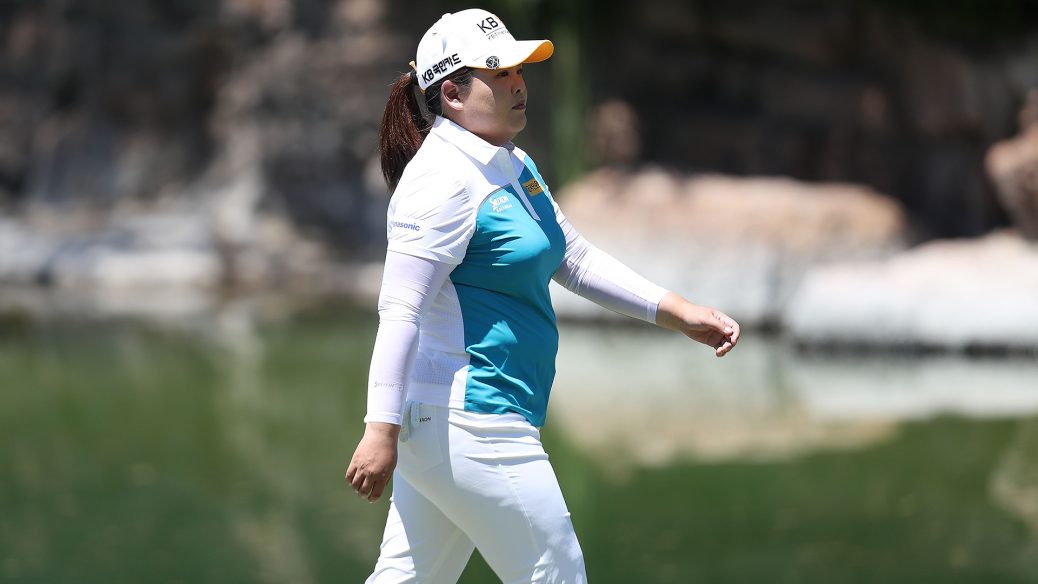 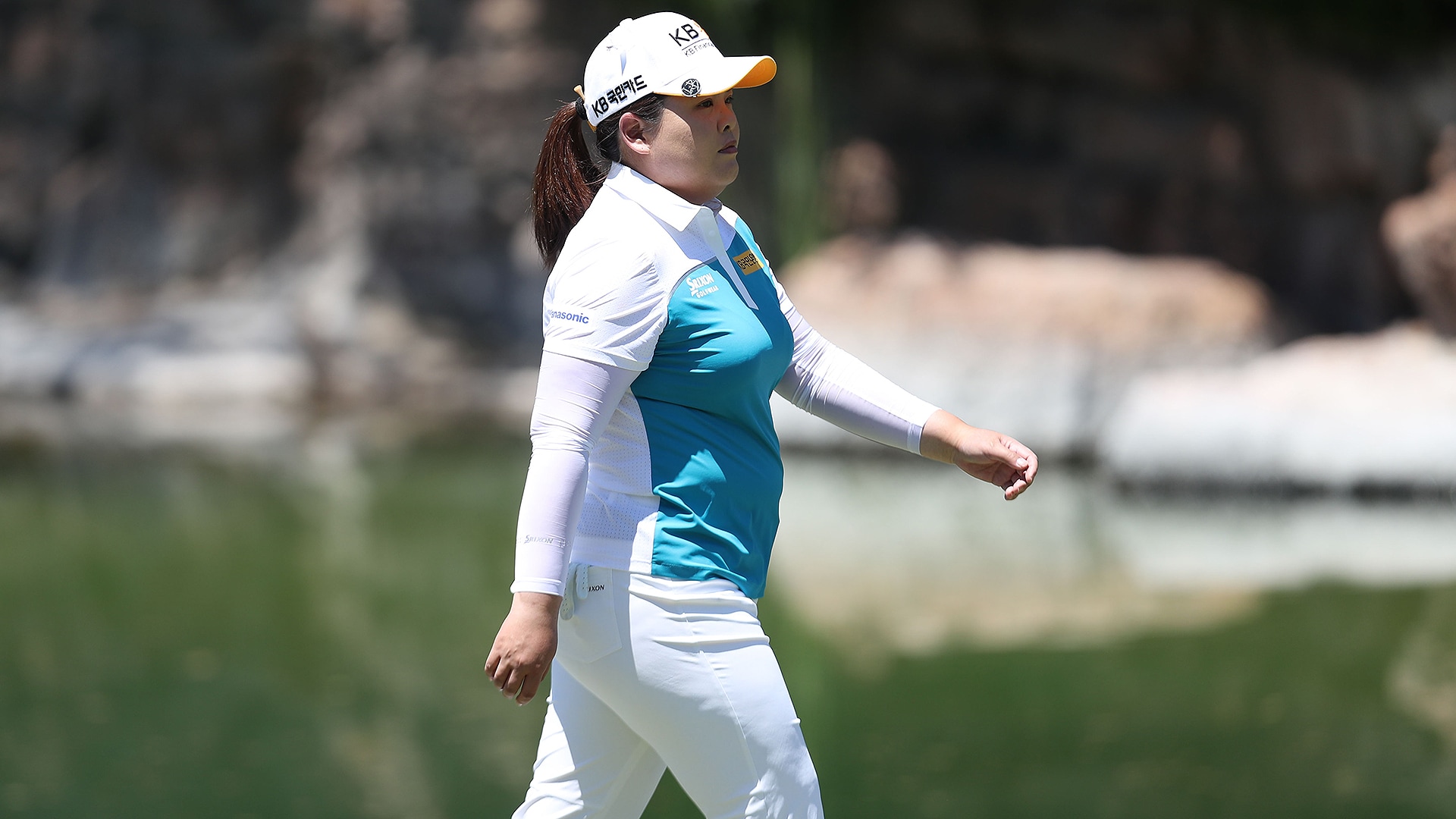 Here’s a look at how the 32 matches played out on Day 2 of the round-robin format in the Bank of Hope LPGA Match Play.

Players will compete in three days of pool play with the player with the best record from each of the 16 groups (playoffs will determine a group winner, if necessary) advancing to the knockout stage of match play at Shadow Creek. Click here for group records.

Jin Young Ko (1) def. Caroline Masson (33), 1 up: Ko held a 3-up lead over Masson with three holes to play, but Masson rallied with back-to-back wins at the 16th and 17th holes to push the match with the world No. 1 to the 18th hole. From more than 50 feet at the par-5 18th, Masson nestled her eagle putt to within gimmie range. But Ko also made birdie and closed out the match.

Anna Nordqvist (32) def. Natalie Gulbis (64), 5 and 4: Gulbis kept pace with Nordqvist on the opening nine, winning two holes to sit just 1 down as the pair made the turn at Shadow Creek. But the back nine belonged to Nordqvist, who starting at the 10th, won four of five holes to close out Gulbis.

Inbee Park (2) def. Celine Boutier (34), 5 and 3: Wednesday, Park narrowly squeaked out a tie in her match. Thursday, she was quick to make sure that her match never came that close. Park won four consecutive holes as she made the turn with Boutier, who suffered two bogeys and a double over that same stretch. Park won with a convincing 5-and-3 victory over Boutier at the par-4 14th.

Gaby Lopez (31) def. Jennifer Chang (63), 4 and 2: Lopez was determined not to suffer a loss for the second day in a row. She won six of the first seven holes to take an overwhelming 5-up lead on Chang, an LPGA rookie. But Chang battled back with wins on holes 10-12 to climb to 2 down in the match. It wasn’t enough to catch Lopez, who added another win at the par-4 14th and won the match, 4 and 2.

Sei Young Kim (3) vs. Yu Liu (35), tied: This closely contested match saw the lead change hands five times as both Kim and Liu won six holes each. Liu took a narrow 1-up lead with one hole to go, but Kim birdied the closing hole to finish the match in a tie.

Brittany Altomare (30) def. Ayako Uehara (62), 1 up: For the second consecutive day, Altomare won her match at the par-5 18th. Thursday, Altomare pitched her ball into the green to take the edge off and then watched as it trundled to within inches of the hole for birdie. Uehara was unable to answer with a birdie of her own, giving Altomare the 1-up victory.

Jenny Coleman (61) def. Angela Stanford (29), 2 and 1: For the second consecutive day, Coleman pulled off a stunning upset in her match. Thursday, the No. 61 seed defeated Stanford, the No. 29 seed and Solheim Cup veteran. Coleman never trailed in her match, going as much as 3 up for the day. She closed out the match at the par-3 17th, where she won her sixth hole of the day.

Ashleigh Buhai (36) def. Brooke Henderson (4), 1-up: Henderson, the No. 4 seed, suffered an upset for the second straight day. Henderson led 2 up at the par-3 13th, but back-to-back bogeys derailed her day. Buhai won four of the next five holes to flip the lead and pull off the upset.

Full-field scores from the Bank of Hope LPGA Match Play

Danielle Kang (5) def. Madelene Sagstrom (37), 2 and 1: Kang took a commanding lead in her match for the second consecutive day. She never trailed and recorded five birdies en route to a 2-and-1 defeat of Sagstrom.

Lizette Salas (28) def. Albane Valenzuela (60), 3 and 2: The match got off to a slow start with Salas winning the first hole of the day at the par-5 fourth. Valenzuela won her only hole of the match at the par-4 10th, where she was able to pull even with the Solheim Cup veteran. But Salas hit the accelerator on the closing stretch, winning holes 13-15 to close out the match, 3 and 2.

Jenny Shin (38) def. Hyo Joo Kim (6), 2 and 1: Shin took the early lead in her match with a win at the first hole of the day. She never trailed and extended her lead to as many as 2 up at the par-4 10th. But Kim rallied with back-to-back birdies to pull even with Shin. At the par-5 16th, Kim made bogey to open the door for Shin to retake the lead in the match. A final birdie by Shin at the par-3 17th gave her the 2-and-1 victory.

Alison Lee (59) def. Megan Khang (27), 1 up: Khang led the entire front nine but Lee won holes 11-13 to flip the match and take a 2-up advantage with five holes to play. Khang rallied with wins at the 14th and 16th holes to pull even with Lee with two holes to play. Faced with a must-make at the closing hole to win the match, Lee drained, from outside 20 feet, a long sweeping left-to-right putt to win the hole and the match.

Patty Tavatanakit (7) def. Mi Hyang Lee (39), 2 and 1: Tavatanakit never trailed in the match despite struggles from both players, who finished with a pair of double bogeys. The major champion was able to hang on to a 2-up advantage to win her first match of the week and deal Lee her second consecutive loss.

Stacy Lewis (26) vs. Sarah Kemp (58), tied: Kemp looked poised to pull off an upset for the second consecutive day as she took a 2-up lead on Lewis with two holes to play. But Kemp stumbled over the closing stretch with back-to-back bogeys, which allowed Lewis to win the final two holes with a pair of pars to tie the match.

Moriya Jutanugarn (25) def. Jaye Marie Green (57), 6 and 5: Jutanugarn followed a 5-and-3 victory over Cheyenne Knight on Day 1 with another commanding victory on Day 2 by defeating Green, 6 and 5. Jutanugarn led the entire match and won four holes in a five-hole stretch to close out the match at the par-3 13th.

Minjee Lee (8) def. Cheyenne Knight (40), 4 and 3: Lee gave herself a nice birthday gift in defeating Knight handily on Day 2 at Shadow Creek. While Knight took the early lead with a birdie at the par-4 second, Lee won two of the next four holes. She never relinquished the lead for the remainder of the match and won the 14th and 15th holes to close out Knight, 4 and 3.

Mel Reid (24) def. Gerina Piller (56), 3 and 2: Piller jumped out to the early lead with wins on two of the first four holes. But the momentum shifted as the pair made the turn as Reid won five consecutive holes to take a commanding 4-up lead. Piller rebounded with back-to-back birdies at the 14th and 15th holes, but it wasn’t enough to catch Reid who closed out the match at the par-5 16th.

Hannah Green (9) def. Azahara Munoz (41), 1 up: Green looked on pace to close the match out early when she took a 5-up lead through seven holes. But Munoz battled back, winning six of the next 10 holes to sit just 1 down with one hole to play. Munoz’s magic ran out at the par-5 18th, where she settled for a par and Green won the match, 1 up.

Nasa Hataoka (10) def. Jasmine Suwannapura (42), 6 and 4: Hataoka won seven of nine holes on the front nine to take a 4-up lead as the pair made the turn at Shadow Creek. Suwannapura won just two holes during the course of the match as Hataoka closed with wins on holes 12-14 to win the match at the par-4 14th.

Mi Jung Hur (23) vs. Jing Yan (55), tied: Yan took early command of her match with Hur, taking a 3-up lead after 10 holes. But Yan struggled over the closing stretch, suffering three consecutive bogeys to allow Hur to rally in the match and take a 1-up lead with one to play. Yan rebounded with a birdie at the par-5 closing hole to tie the match.

Mirim Lee (22) vs. Ryann O’Toole (54), tied: This tightly contested match saw both players win seven holes over the course of the day. Lee jumped out to the 1-up lead with back-to-back wins at the 16th and 17th holes, but O’Toole rallied with an eagle at the last to tie the match.

Bronte Law (44) def. Austin Ernst, 2 and 1: Law capped off her match with Ernst with a hole-in-one at the par-3 17th to win the match, 2 up. At the turn, Law held a 2-up lead but struggled with three consecutive bogeys to let Ernst flip the match. Law rebounded, however, capturing three of their last five holes to win for the second consecutive day. The ace is Law’s eighth in competition.

Amy Olson (21) def. Annie Park, 3 and 2:  Olson made bogey on two of the first three holes of the match to give Park the early advantage. But, Olson hit her stride at the par-5 fourth hole and never looked back. She won seven of the next 13 holes to take a 3-up lead on Park. She closed out the match with a birdie at the par-5 16th to win, 3 and 2.

Jennifer Kupcho (13) vs. Leona Maguire (45), tied: Two former amateur standouts squared off on Thursday. Maguire, an LPGA Tour rookie, jumped out to the quick lead in her match with Kupcho, winning five of the first seven holes. But the rookie followed with back-to-back bogeys as the pair made the turn and her struggles continued over in the inward nine. Maguire made bogey on four of the last six holes to let Kupcho back in the match, which finished in a tie.

Ally Ewing (20) def. Christina Kim (52), 2 and 1: The lead changed hands four times over the course of the match between Ewing and Kim, who took a 2-up lead at the turn. But the momentum began to swing at the par-4 10th, where Kim made double bogey to allow Ewing to begin climbing back into the match. Ewing won three of the next seven holes to flip the match in her favor to win, 2 up.

Jeongeun Lee6 (14) def. Brittany Lincicome (46), 5 and 3: Lee6 won two of the first three holes and never gave Lincicome a chance to battle back into the match. Lee6 led the entire day and closed out Lincicome, 5 and 3, at the par-4 15th.

Shanshan Feng (19) def. Pajaree Anannarukarn (51), 1 up: Feng had an opportunity to close out the match with a birdie opportunity at the par-5 16th, but three-putted for bogey to open the door for Anannarukarn. Feng made a second bogey at the par-3 17th to fall into a tie with the 2019 LPGA rookie. At the final hole, Feng squeaked out a narrow win with a par when Anannarukarn made bogey.

Hee Young Park (50) def. Sung Hyun Park (18), 2 and 1: In a closely contested match that didn’t go more than 1 up through the first 15 holes, it appeared either Park could win. But Sung Hyun struggled over the closing stretch, suffering bogeys at the 15th and 16th holes to give Hee Young a 2-up lead in the match. At the par-3 17th, Sung Hyun lipped out a must-make birdie putt to extend the match.

Ariya Jutanugarn (16) def. Sarah Schmelzel (48), 4 and 3: Jutanugarn won three of the first four holes of the day to take a quick 3-up lead. While Schmelzel tried to rally with back-to-back birdies to win the sixth and seventh holes, it wasn’t enough to catch Jutanugarn, who led the entire day. Jutanugarn closed out the match, 4 and 3, at the par-4 15th.

Lauren Stephenson (49) def. Carlota Ciganda (17), 3 and 2: In a surprising upset, Stephenson handily defeated a Solheim Cup veteran in Ciganda. Stephenson led the entire match, in which Ciganda won just two holes with her only two birdies of the day. Stephenson extended her lead to as many as 4 up and won the match on the par-5 16th hole.