Players who want to sample a homage to links-style golf near Orlando should not wait too long to play what was Grand Cypress Resort and its New Course, because the 1,100-acre property is in store for massive changes through 2023 as it is transformed into the Evermore Orlando Resort.

Those changes include a new Jack Nicklaus-designed 18 holes, while each of the previous courses at the massive resort are shuttered or will be by the end of 2023.

Developer Dart Interests announced this week that it is planning a $1 billion renovation of the property just east of Disney World. The Dallas-based Dart Interests acquired a majority stake in Grand Cypress in 2014, according to the Orlando Sentinel.

Until 2019, Grand Cypress was home to the Nicklaus-designed New Course as well as three other nines – the North, South and East – that could be played in various combinations as an 18-hole layout. The nine-hole courses were host to several LPGA tournaments, most recently the 2011 CME Group Titleholders.

The three individual nines were shuttered in 2019, while the New Course remains open for the next several years during construction of the resort’s many amenities.

The New Course, named in honor of the Old Course at St. Andrews, is intended to play as a links-style layout. The parallel first and 18th holes mimic those same holes at the Old Course, with a giant shared fairway as the holes run in opposite directions. Other nods to St. Andrews include a creek that somewhat replicates the Swilcan Burn. Being in Florida, the course rarely played with true, bouncy links conditions, but it has been a fun, almost treeless layout popular with locals and tourists alike since it opened in 1988.

Dart Interests said it plans to maintain the course through completion of resort construction in 2023, then replace it with a new Nicklaus-designed course on part of the site that previously held the nine-hole tracks. Details of the new Nicklaus course have not been announced, but a news release on Evermore’s website says the 18-hole layout will “pay homage to the legacy of golf excellence at Grand Cypress.” 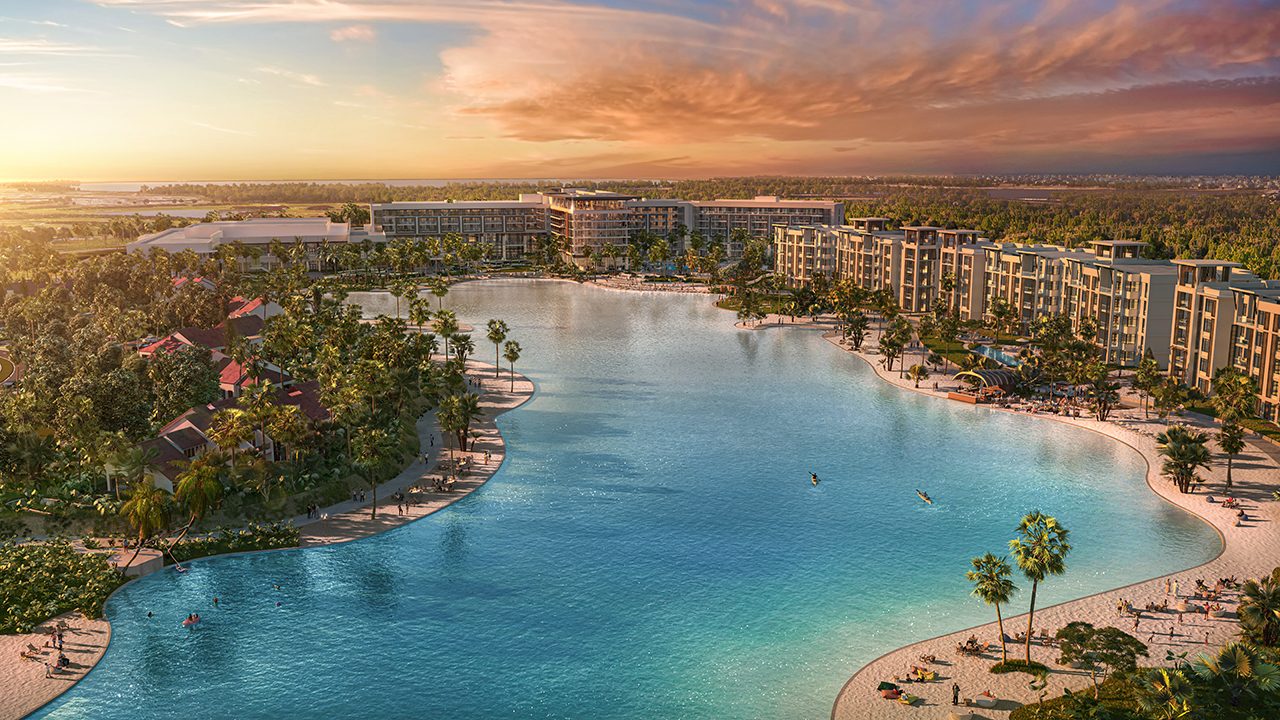 A projection of how Evermore Orlando Resort, which will replace Grand Cypress Resort near Disney World in Central Florida, will look after construction wraps in 2023. (Courtesy of Hilton)

In all, the new resort said in the news release on its website that it will offer more than 10,000 bedrooms in a variety of settings including a 433-room Conrad Orlando at Evermore hotel, 69 rental houses ranging from five to 11 bedrooms each, 76 four-bedroom flats, and 41 two- and four-bedroom villas.

“We are incredibly excited to expand on our strong presence in the Orlando market and introduce the Conrad brand to a new city,” Danny Hughes, Executive Vice President and President of the Americas for Hilton, said in the release. “Conrad Orlando at Evermore will undoubtedly be a sought-after destination for Orlando travelers and will provide guests with outstanding service and impactful experiences when they visit the city.”

One of the more interesting and expansive components of the Evermore will be an 8-acre lagoon-style pool that will feature zero-entry swim areas, bars, cabanas, private fire-pits and an aquatic adventure area with a waterslide, rope swing and watersports.

“With the launch of the Evermore project, Dart is introducing an entirely new hospitality category that will change the landscape of vacation rental homes,” Christopher Kelsey, President of Dart Interests, said in the news release. “We are creating the first-ever wholly owned, large-scale community of purpose-built vacation rental homes and operating them with hotel-quality standards and world-class resort amenities. Our approach solves the No. 1 problem for vacation renters: uncertainty in the quality of the home.

“Almost all vacation rentals are owned by individuals, each with their own unique tastes and willingness to maintain the properties. Our centralized ownership model makes it possible for our guests to be certain that they are getting a first-class home with superior safety standards.”