Brandel Chamblee Q&A: Commish for the day, does he really believe everything he says & Cancel Culture

Home Brandel Chamblee Q&A: Commish for the day, does he really believe everything he says & Cancel Culture

Whether you love him or hate him, Golf Channel’s Brandel Chamblee makes good TV with his sharp opinions and willingness to criticize the best players in golf. In Part I of our latest Q&A, Chamblee discussed the struggles of Rickie Fowler and the winless drought of Tony Finau and we did a deep dive into the U.S. Ryder Cup and future options for the captaincy. You can read it here.

In Part II, Chamblee explains how he’d change course setups,  dishes on the distance debate and being on the other end of criticism, and why he’s not afraid to take the contrarian view.

Golfweek: If you were Commissioner of the PGA Tour for the day, what would you change?

Brandel Chamblee: The first thing I’d do is get rid of the top-50 exemption and then I’d get rid of the top-25 exemption. There’s no place for safety nets in sports. Those take up spots. However many it is, it’s too many. It should be a merit-based sport.

Every time someone new pops up on our radar, like Will Zalatoris, everyone says it is great to see a new young player come along that seems to be fearless and, yes, I agree. But every time that happens, I think someone just lost their job. If Will Zalatoris comes along and you can’t compete with him, you should lose your job. There should be no guarantees. Why does golf provide safety nets? No other sport does. You can go down to the minor leagues like the rest of the world does and fight your way back. 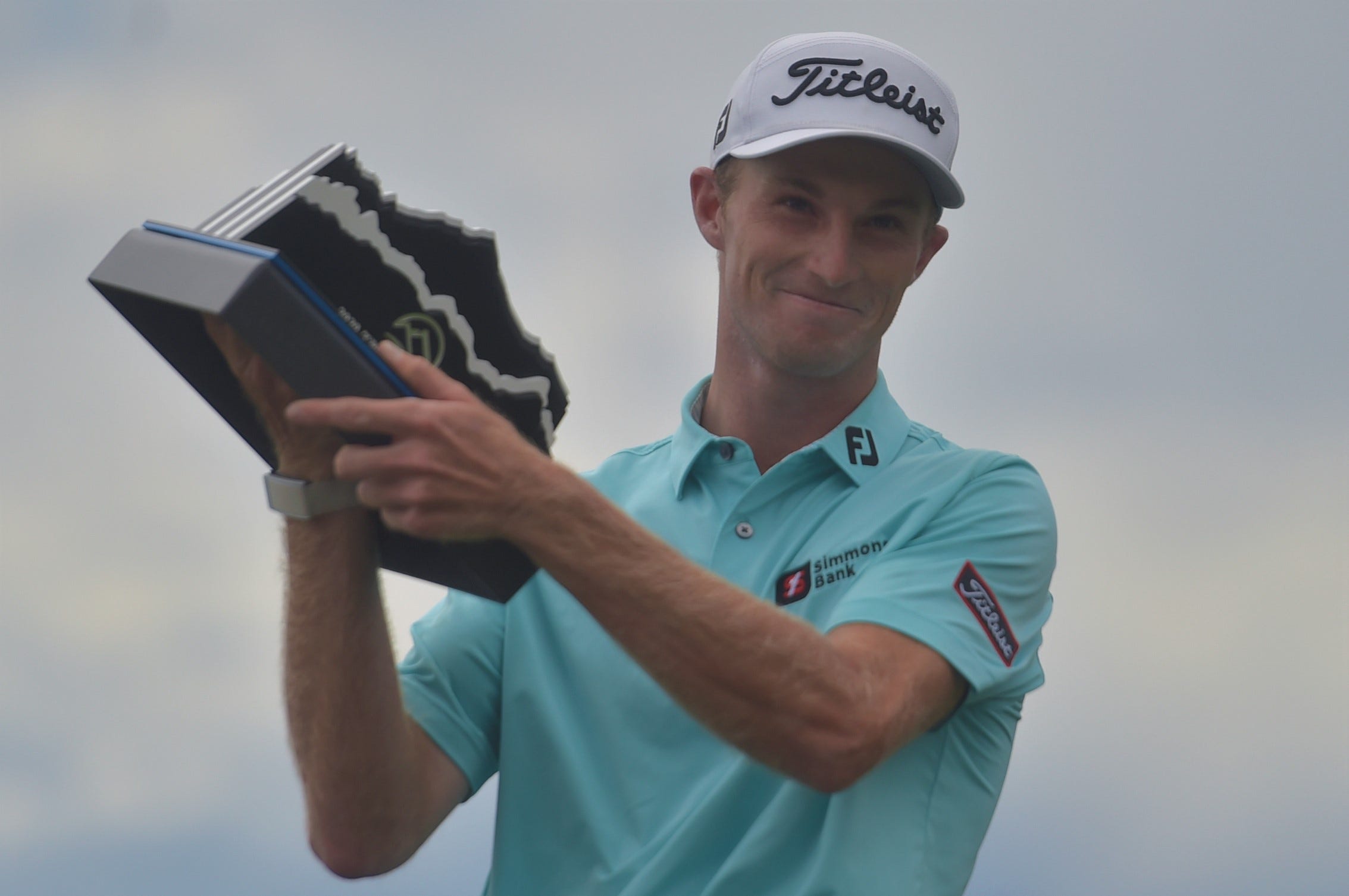 Will Zalatoris holds the trophy after winning the TPC Colorado Championship at Heron Lakes on Saturday, July 4, 2020. (Kevin Lytle/The Coloradoan)

BC: That would be the day after I take away those exemptions. Actually, it’d be the same day because it would take me two minutes to say, I’m sorry, those exemptions are over. That would be more difficult to do because you’d have to go to a board and that board would have to present these and if I had autonomy, and I don’t think the commissioner position works that way, but I might take a detour down to the course setup guys and say, the fairways have to be wider, the rough has to be thicker, but only in a certain number of events.

There are events where long tee balls and recovery shots from the rough is exciting. I get it. If I were running a Tour event 20 years ago, I would’ve cut the rough too. I would want Tiger and Phil to be in contention on Sunday and the best way to ensure that is to cut the rough because they drove it all over the place. I understand why they did it. But to identify the best player and for the best future of the game is to restore the value of finding fairways.

To do that you can’t do what the USGA did at the U.S. Open. You can’t do that with 1980s-width fairways and 1980s-height rough. That’s stuck in thinking from 40 years ago. You have to extrapolate to dispersion cones with 310 yard drives, which means the fairways need to be 5-6-7-8 yards wider but the rough has to also be 2-3-4 inches taller. You can’t have the same width and height rough as you did in 1984 because guys didn’t swing as hard and didn’t come in as steep. The rough has to have a penalty to have a penalty of .5 as opposed to .2 or .3. You have to get the rough up to 4-5 inches and it needs to be thick and if it is 5-6 inches all the better.

But the fairways need to be wide enough to where the straightest drivers of the ball can find them so they can offset their disadvantage. That seems pretty straightforward to me. What else are you going to do?

GWK: Do you believe everything you say on air?

BC: (Laughs) Yeah. There are times when I change my mind, when I will think about it or come across information, but I’ve sat in meetings before where someone has said if someone is going to say this can we get someone to speak to the other side of it, and on issues where I’m sort of ambivalent I’ll say, yeah, I’ll take the other side. Happy to do it.

More often than not it, it doesn’t work out that way. You want to speak to an issue 360 degrees. By the time I say something on the air, I’ve thought about it, I’ve researched it and thought of counters to it, but yeah, I’ve certainly changed my opinion. I’ve done it on the distance debate. I think you should constantly take your opinions out, kick ’em around, beat ’em with a broom, and see if they stand up to scrutiny. I’ve tried to do that as often as I can. I’ve done that with teaching, the golf swing, the putting stroke. I’ve changed my view on a lot of things where I’ve come across information that proved me to be wrong, informed me in a better way. Yeah, I’ve said things on the air that I wouldn’t say now, that I disagree with now, that I wish I’d never said, but for the most part I try to be very, very careful about the words I use and the opinions I have.

GWK: What does your mailbox of feedback look like from viewers? What do you learn from it and what’s the general pros and cons?

BC: We live in a very critical world now. I’m not oblivious to criticism. I’ve always said you should be able to be criticized and complimented and never feel any way about either of them. When criticism comes from the right people and the right sources, when it’s valid or there is a grain of truth to it and you can learn from it and I take it to heart. I certainly pay attention to critics whose opinions I value and don’t have an ax to grind with my position on things. It’s amazing, I’ve gotten along with so many people in this game forever but the fact that I differ with them on the distance report, it’s almost like within the golf world you’re voting for Trump or Biden.

People feel that passionately about the distance issue with the USGA and R&A. I’m not sure I feel as adamantly against the rollback as people think I do. I just think that it seems that all the people that are in the architecture industry are for a rollback and I think the more difficult argument is why the game is better left alone.

I enjoy the more difficult argument. I enjoy trying to get to the bottom and to the truth of things but I tend to think that the most popular view doesn’t have a great record on a lot of things. It’s quite often wrong. So, I think, how is it wrong? I go and do research to discover if it is right or wrong, and try to figure a way to counter. That’s fun. I’ve always said we make progress by disputation and argument. That’s why the First Amendment is so important and the cancel culture is so bad. When you make arguments, they are never perfectly formed. Ever. They are imperfectly formed. You state an opinion and inevitably someone will know something that you don’t or think about it in a way that you don’t and will point out the errors in your opinion and so you reconvene and you try to make a better opinion, a more informed opinion and you stumble towards your better self and your better ideas.

The Cancel Culture is so ready to hold people accountable for arguments that are not perfectly formed and not perfectly stated. Listen, there’s no place in the world for racism and bigotry but in a world where people are preaching tolerance they should have some tolerance for people who make a mistake here or there for their phrasing of an argument. That’s why the First Amendment is so important. We should all take a deep breath.

There’s the idea of the straw man. The opposite should be the case. You should make a steel man out of your opponents’ arguments and ideas. You should try to formulate the most perfect idea of what someone is saying in the most perfectly stated verbiage to hold up their idea in its best essence and say I get what you’re trying to say and how is it assailable, how is it wrong? That’s how you get better at everything.

GWK: If you could require every player on Tour to read one book, what would it be?

BC: I think the most important book I’ve read in informing me is Guns, Germs and Steel written by Jared Diamond. If school kids were made to read it in school, ignorance, bigotry and prejudice would be gone. I can hardly think of a more important book to read. The Gulag Archipelago by Aleksandr Solzhenitsyn, every American should read that book. Those books right there just inform you about why man is the way he is, keep you on guard for the malevolence in men and gives you a great philosophical foundation to go learn, study or think about or talk about whatever you want to talk about.

I’ve never come across anyone smarter than Friedrich Nietzsche. If I can get on a soap box for a minute, I think this generation feels entitled to be happy. I think that’s a very dangerous thought. Friedrich Nietzsche has a great line that he who has a why to live can bear almost any how. If you have meaning in your life then you can deal with adversity and stumble towards your better self. It’s a marvelous philosophical precept. No one deserves to be happy. If you’re lucky, you can find something that gives meaning to your life, which will then allow you to be happy. It’s not happiness. It’s meaning, which allows you to deal with adversity. Adversity is everywhere. You deal with it every day in large and small capacities. Those are books that mean a lot to me.