For Jordan Spieth, no better place to end the grind than Augusta National

Home For Jordan Spieth, no better place to end the grind than Augusta National

AUGUSTA, Ga. – Sitting in a golf cart with his feet up and his mood on the right side of par, Jordan Spieth looked far from a man battling adversity.

The sun was shining on a spectacular October day in Las Vegas and Spieth had just finished his pro-am round ahead of the CJ Cup at Sherwood. Speaking to two reporters just outside of the clubhouse at the fabulous Sherwood Country Club some 20 miles north of the Las Vegas Strip, Spieth was quick with a smile and an answer and had the look of a man who just cashed for huge dollars in a casino.

Instead, one has to look elsewhere for signs of the struggles Spieth has endured since falling from the elite level of golf. The Official World Golf Rankings, for instance, where the former No. 1 has tumbled to No. 80.

Or the interview list ahead of this week’s Masters. He’s not on it.

Or the multiple gaming sites that list Spieth’s chances of winning at Augusta National this year anywhere from 60-1 to 80-1. That’s astounding for a player who has been in contention to win five times in his six Masters starts.

Masters: How to stream, watch on TV | Tiger’s history at Augusta

But it’s equally alarming to have witnessed the steady descent of a man who once ruled the game, the man who won 14 worldwide titles, including 11 on the PGA Tour, before turning 24. The man who has won three legs of the career grand slam, the most recent coming amidst the massive dunes of Royal Birkdale, where his stunning comeback on the final six holes won him the Claret Jug in 2017.

But that was his most recent win.

“At this point, I’m trying not to look back to bad or good. Just trying to forget everything that’s happened,” Spieth said of his three-year struggle. “Everything that’s good has been awesome. I’m not the person or player I was five years ago, not the person or player I was two years ago. If anything, (the struggle) has provided me with advantages going forward. I’m just trying to look at it as a clean slate. It’s a patience game that is hard for me to deal with because I’m not a patient person. But I’m getting better.”

Spieth has come to call it the grind, that he’ll keep his nose to the grindstone and shoulder on. It hasn’t been easy, as his antics on the golf course – the constant chatter, the sunken shoulders, the shaking head of disappointment – have indicated. Like in his last prep for the Masters, where he three-putted his final hole – missing a 4-footer – and was shaking his head back and forth as he walked off the green and knew he had missed the cut by one in the Vivant Houston Open.

Takes on his status from analysts have mounted as Spieth has struggled with every aspect of his game at times, including his trusted putting stroke. Mostly, however, his work with the longer clubs has given him fits. Colt Knost said the “wheels are just kind of falling off for Jordan Spieth right now,” and he’s gone “full technical” with his game. David Duval said, “I believe he needs to let go of (swing coach) Cameron McCormick’s hand and start digging it out of the dirt himself. That’s nothing against Cameron. (Spieth) just needs to figure it out himself.”

Spieth said he’ll figure it out on his terms.

“One thing I had anxiety over was not being able to fail in the dark, not being able to grow and be able to make mistakes without it being very open and public,” he said. “That’s just the way it is. There was no hard feelings, no blame. That’s what I get for the start of my career, which was awesome.

“I know what I’ve done, I know what I’m capable of doing, and when I don’t do it, it’s more frustrating for me than it is for anyone else. I forced stuff for a while. I had to take a step back, start making progress in the right direction and trust it.

“I’ve got a lot of trust in the team. Moving forward, I’m going to forget everything and draw on what I need to do.”

Part of that team is his father, Shawn. He was called in for caddie duties at the Zozo Championship at Sherwood last month after Spieth’s longtime caddie, Michael Greller, lost his mother. Greller is back on the bag.

“As a parent, it’s always tough. As my wife always says, you’re only as happy as your unhappiest kid. And he was the unhappiest kid for a couple years,” Shawn Spieth said. “This last year has been a lot better. At first, not having the results he wanted, then other multiple little reasons, and then little things he was working on, and getting off and then trying to make some adjustments, that was tough. Because it was the first time he lived through it.

“But after that period, it’s been kind of cool to watch him develop more patience. He’s hitting it so much better than he was not that long ago, so I think a little, couple of the adjustments he’s made are going to work.

“It’s hard to look up there (scoreboards) and see he was on the first page for five years and you expect it, but you also know it’s golf. He’ll compete his way out of this and he’ll never quit until he does figure this out. He’ll continue to work as hard as he does. And we know as he worked so hard to get his swing to where he wants it, his short game suffered a little. But that’s starting to come back.

“He’s too naturally driven and talented not to get back to being very, very competitive. He’s going to be always pushing.”

Especially at Augusta National. If there’s any place Spieth will blossom once again, it is at this former Fruitland Nursery.

Check the track record. He has a record eight rounds of par or better to start his career at Augusta. He led at the end of seven consecutive rounds from the first round of 2015 through the third round of 2016, another record.

Spieth tied for second in his first start in 2014 playing alongside eventual winner, Bubba Watson, in the final group.

He was at his zenith when he unleashed a tour de force in 2015, winning by four, tying the scoring record set by Tiger Woods (18 under), setting a tournament record for most birdies (28) and establishing scoring records through 36 (-14) and 54 holes (-16). He also became the only player to ever reach 19 under.

He led by five shots with nine to play in 2016, before a disastrous quadruple-bogey 7 on the 12th wiped out his lead and led to a tie for second. 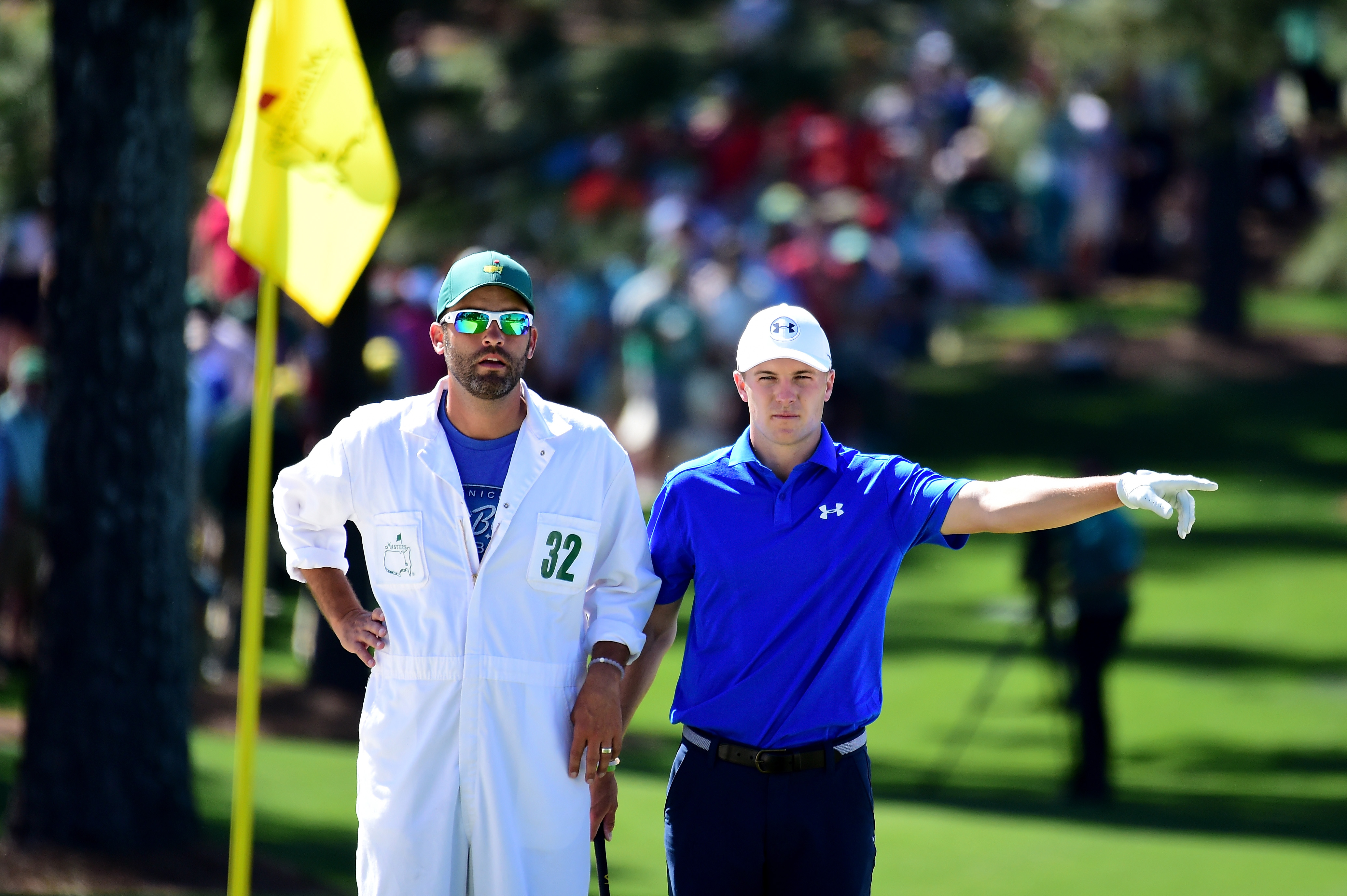 It wasn’t meant to be for Jordan Spieth as he found the water again on No. 12 Sunday. (Photo: Harry How/Getty Images)

Spieth said he doesn’t flip a switch when he drives down Magnolia Lane. Instead, he’s loved the course from the get-go and his mind is free of any technical concerns involving his swing. With all the uneven lies amid the Georgia Pines, Spieth instead calls on his imagination to get around.

“I have quite a bit of course knowledge. And I always talk about the feel aspect,” Spieth said. “At Augusta, it’s less mechanical, more feel. You’ve got to deal with hitting the ball off a sidehill lie with the ball well below your feet, or a sidehill lie with the ball well above your feet. You have to work different shots. It makes you be an athlete versus a driving range pro. You have to have a lot of course knowledge on where to leave shots. And when you’re off a bit, you can’t always commit to every single shot. You’ve got to play a little defense.

“That part of knowing the course well, being prepared for anything, not being afraid to contend there, I feel more comfortable. Even when I’m feeling uncomfortable over the ball.”

He’s felt uncomfortable over the ball for a long time. But he remains confident that time is coming to an end. Perhaps as soon as this week.

Another puzzling display from Jordan Spieth, this time in his home state