Happy Gilmore turns 25; here are 4 things you might not know about the movie

Home Happy Gilmore turns 25; here are 4 things you might not know about the movie

The lines are legendary. The premise is ridiculous. You’ve probably even attempted the swing when nobody was looking on the driving range.

Tuesday, February 16, 2021, marks the 25th anniversary of the theatrical release of “Happy Gilmore,” the Adam Sandler movie about a failed hockey player who takes his talents to the golf course in order to save his grandmother’s house.

The comedy has undeniably become a part of golf’s culture. With that in mind, here are four interesting things you might not have known about the movie, which was directed by Dennis Dugan and filmed primarily in British Columbia.

Although Bob Barker’s scene with Sandler has become legendary, he originally wasn’t in the producers’ plans. Instead, Sandler and others tried to woo Ed McMahon, Johnny Carson’s sidekick, for the role, but he never responded to inquiries.

When Bob Barker was later asked to come on board with the project, he agreed to do so with two stipulations — that writers would re-work the scene to allow Barker to beat Gilmore in a fight … and that the “Price is Right” star could shoot his own fight scenes rather than have a body double.

Barker had been training with his neighbor, Chuck Norris, and wanted to show off his skills.

“We trained every night,” Barker told Sandler while filming. “He helps me with my punches and my kicks, but I have to win this fight.” 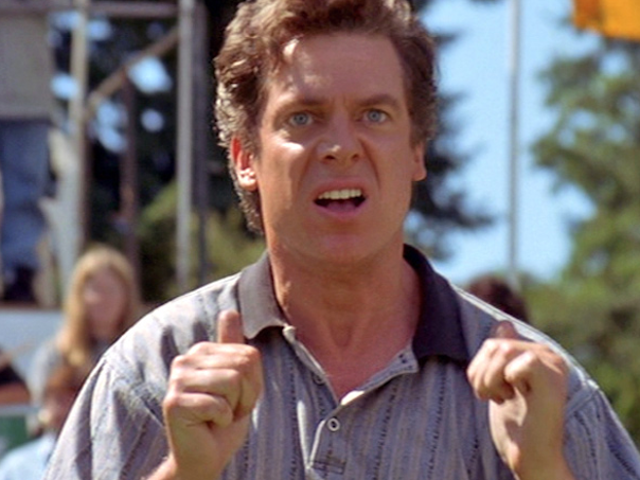 Although Christopher McDonald has become synonymous with Shooter McGavin, he was not the first choice for the role. Producers were hoping that Kevin Costner would play the part but he was interested in making “Tin Cup.”

McDonald almost turned down the role of McGavin as well because he was trying to break of the stereotype of playing villains. After meeting Adam Sandler and realizing how funny the film would be, he agreed to the role. McDonald has since said it was one of the very best moves of his career.

Happy is a real person … sort of

According to multiple reports, Happy Gilmore was loosely based on a childhood friend of Sandler’s named Kyle McDonough. The two grew up in Manchester, New Hampshire, and would occasionally play golf, but McDonough’s driver was always the more impressive of the two. Sandler always attributed this to McDonough’s hockey knowledge.

Mark Lye was a consultant (and made a cameo)

Not only was Mark Lye the only PGA Tour player to have a line in the movie (Lee Trevino is shown shaking his head a few times), but he also served as the official script consultant on the film and helped make others better players.

In fact, McDonald for one, said he vastly improved under Lye’s tutelage.

“I mean I wasn’t a great golfer at the time,” McDonald told Forbes. “I got to be quite good during it because I had Mark Lye on my shoulder helping me with my swing and my all-around-game, course management as it were. But, my game got better [and] at the same time I had a lot of fun doing it and we’re all up in Canada shooting it up by Whistler and all kinds of great places.

“So it was a treat. And it’s generational now. So you got to love in an actor’s career to have a movie that basically people know you instantly from because it’s on a loop on television, which is great. People seem to like it from all ages. So I say more power to them.”