How important is the PGA of America's Frisco site to architect Beau Welling? 'I'd have designed the parking lot'

Home How important is the PGA of America's Frisco site to architect Beau Welling? 'I'd have designed the parking lot'

FRISCO, Texas — Golf architect Beau Welling certainly has an impressive resume — creating Bluejack National outside Houston and guiding a massive rehaul at Quinta do Lago North Course in Portugal are among a growing list of notable works — but when he was one of five to be considered for the two courses at the PGA of America’s new Frisco headquarters, the Brown University product was ready and willing to check any ego at the clubhouse.

“This is a huge, huge deal,” Welling said Tuesday at a groundbreaking ceremony for the Omni PGA Frisco Resort. “When they called me — and they originally set it up like they were going to hire one architect to do everything — and they called me after and said, ‘hey, we really want to get you involved, but we don’t think we can let you do the whole thing. Would you be willing to do a part of it?’

“I was like, man, I’ll design the parking lot.”

And while the parking lot will likely be magnificent, the PGA of America instead tasked Welling with one of the two championship courses on the property north of Dallas — Gil Hanse designed the other — on a complex that’s expected to house 26 championships in the next dozen years, including two PGA Championships.

Like many others who spoke Tuesday, including Texas Gov. Greg Abbott, Welling insisted the Frisco project is a gamechanger.

“I think it’s going to be massive.” 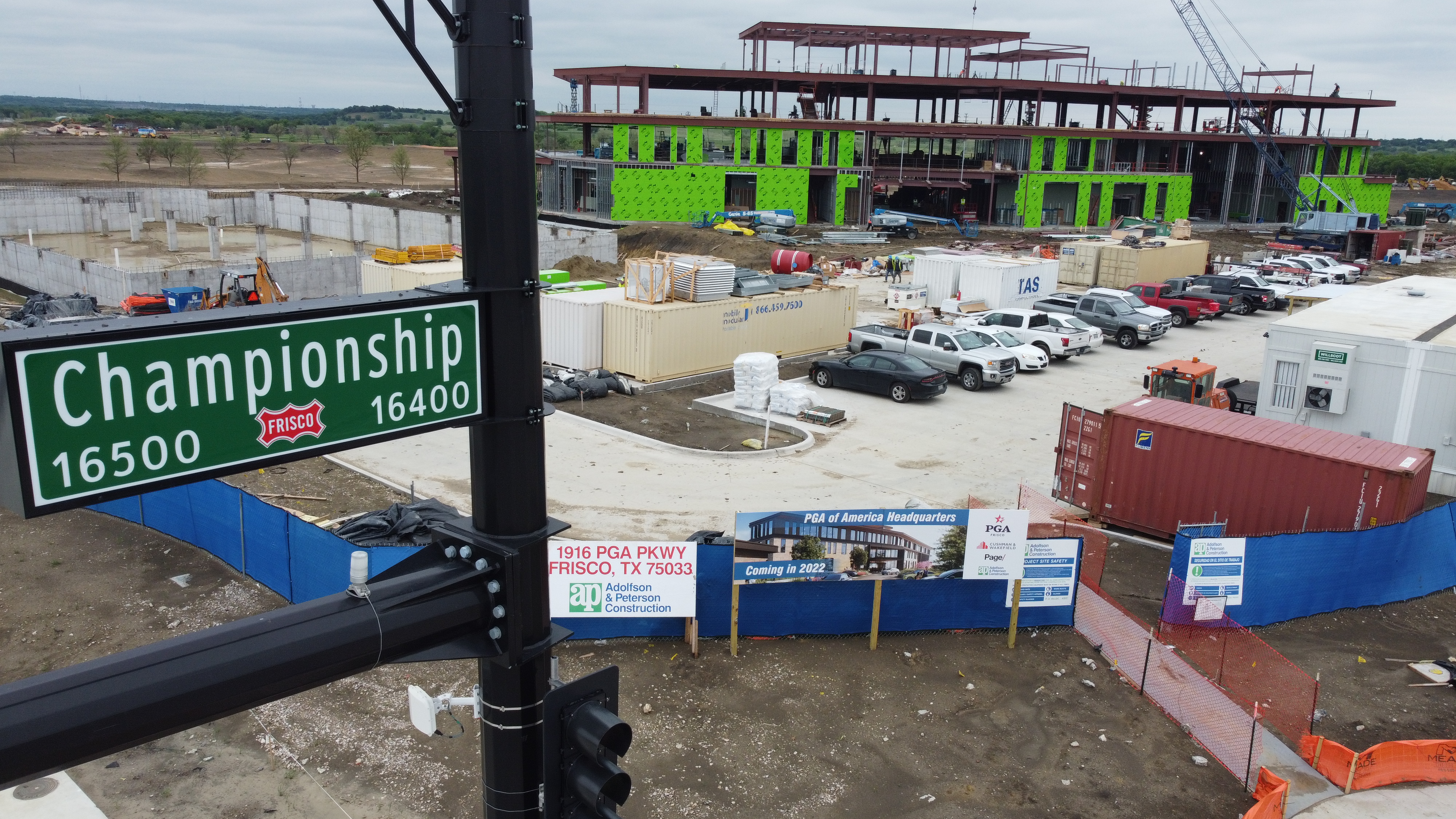 Construction continues on the new PGA of America headquarters in Frisco, Texas.

The courses — Welling’s West and Hanse’s East — are just part of the fun planned for this northern DFW suburb. The Omni project, which includes 501 guest rooms and seven four-bedroom golf villas, is also one component. The hotel will feature a dozen restaurants/food shops, three pools — including an adults-only rooftop infinity pool — 127,000 square feet of indoor and outdoor meeting and event space, and a destination spa.

A 10-hole short course called The Swing and a 75,000 square foot putting course called the Dance Floor will also add to the flavor of the property.

“Does it get any cooler than that? The Dance Floor, the Swing, the East and West Course,” said Jim Richerson, the PGA of America president. “This is not only going to be a resort project, it’s going to be a project that’s going to make memories and create moments for families and generations to come. Not only to get into the game, but to spend time as families.”

Richerson was one of a group that stood at a location not far from Tuesday’s groundbreaking site a half-dozen years ago, when the PGA of America was looking at alternatives to build from its current home in West Palm Beach, Florida.

“Our mission is to not only elevate the status of PGA professionals but to grow the game. We had an opportunity to look around the country for a new headquarters and it started with a new building,” he said. “It started being about where can we relocate for the next 100 years for our new home. It turned into an unbelievable partnership.

Abbott touted the state’s economy, which he said improved in its world standing through the pandemic. The groundbreaking kicked off an aggressive timeline that is expected to have the Omni open in 2023. If all goes as planned, the two golf courses will be open to the public in summer of 2022,

“The PGA is learning what the Omni has long known and what Frisco loudly preaches — Texas truly is the best state in America for doing business and it just gets better day by day,” the governor said.

But Welling was the one who beamed the brightest. As he walked through the luncheon, discussing the project with local and national media members, he rarely lost a wide smile, even when discussing the challenges the project presented.

“I’m sure it’s going to have effects throughout the country for the game of golf,” Welling said. “I could see all that from the very beginning and so that’s why I said I’d design the parking lot. I just wanted to be involved. I’m so thankful and extraordinarily honored to be involved.”