“I do like a glass of wine, but I don’t drink the week of tournaments, so I’m taking it easy; I’m relaxing,” he said. “We are going for a nice meal tonight, we’re going to French Laundry, which is supposed to be very special, so I’m looking forward to that. I’ll leave the drinking to (caddie) Bo. Bo will look after the wine for me this week.”

Lowry squeezed into the FedEx Cup playoffs at No. 123, but missed the cut at the Northern Trust and spent the last two weeks taking a buddy trip to Newport, Rhode Island, and practicing at his U.S. base in Florida for the upcoming U.S. Open.

He arrived here on Sunday and the Irishman was greeted by temperatures reaching 114 degrees. In addition to caddie Brian ‘Bo’ Martin, Lowry is traveling with a childhood friend, who doubles as his physical therapist and keeps Lowry company after his wife and young daughter returned to Ireland six and a half weeks ago.

“It’s not been easy at times. I miss them an awful lot and to be honest, probably if it wasn’t for the U.S. Open next week, I probably wouldn’t have lasted the full stint over here because it’s just been incredibly hard,” he said. “Especially when your daughter’s growing up and she’s only three and a half, but it is what it is. It’s not like I’m going to war or anything, I’m just going to play golf, so I just have to get on with it.”

Lowry, who didn’t play the week before winning the British Open last year in Northern Ireland, joked he’ll probably never play ahead of that major again, but he didn’t want to go into next week’s U.S. Open at Winged Foot in New York having gone three weeks without competing. While some players may have been turned off by having to go from the West Coast to the East Coast for the re-scheduled national championship, Lowry took a different view. 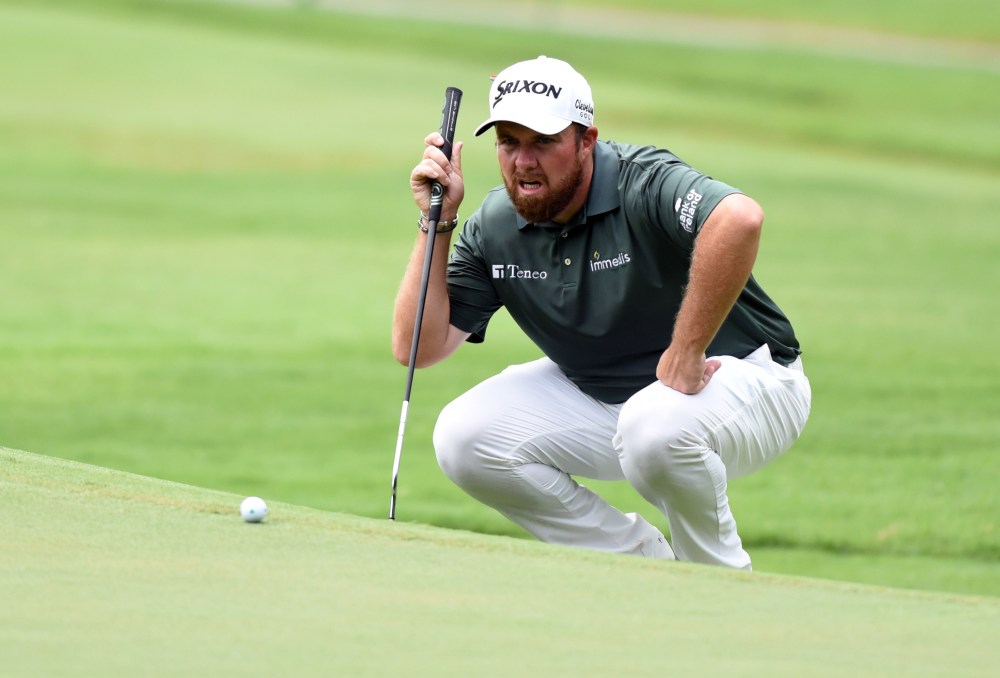 Shane Lowry studies his putt on the first hole during the second round of the Wyndham Championship golf tournament at Sedgefield Country Club. (Rob Kinnan-USA TODAY Sports)

“I’m close, I’m in America. My family are in Ireland, so I couldn’t go back to Ireland because of the quarantine — there was no point — so, yeah, I just decided to play here,” he said. “I would be down in Florida this week just playing golf every day and practicing and probably with my mind too much on the U.S. Open, so it’s nice to get to an event.”

It also gives him a chance to test drive a slew of new equipment under the gun. Lowry arrived at yesterday’s practice round with six different drivers and whittled it down to one and also said he’ll be putting a fresh set of irons in play in hopes that the new grooves will spin more, “which might be helpful at Winged Foot trying to stop the ball on some of those greens,” he said. “For me, this is the only week that matters right now. Then when I get to Winged Foot next Monday I’ll start to think about that, but obviously this week, first and foremost, I want to do well.”