JUNO BEACH, Fla. – Nathaniel Crosby has just the squad he wanted this week for a backyard version of the Walker Cup. Crosby, 59 and returning as captain for the U.S. side this week at Seminole Golf Club (where he’s a member), logged many miles in scouting this team. He popped up everywhere from Bandon, Oregon to Miami.

“There weren’t any awkward moments,” he said of the selection process.

No player on the resulting 10-man U.S. team is ranked worse than No. 34 in the World Amateur Golf Ranking, with half ranked inside the top 10. Even filling the mid-amateur requirement was a no-brainer – 30-year-old Stewart Hagestad makes it so.

“He would have been on the team whether he was 18 or 60,” Crosby said of Hagestad, who advanced to the quarterfinals at the U.S. Amateur in August.

Given this particular South Florida venue, Crosby was just as much of a no-brainer pick in the captaincy department. He’s the latest in a long line of Walker Cup captains to hold a membership at Seminole, Golfweek’s top-ranked private course in the state of Florida. Crosby knows the place as well as anyone, having first seen the golf course in 1976 when he played four days in a row with George Coleman (club president from 1981 to 1992), his father Bing Crosby and a family friend.

When Crosby was an undergraduate at the University of Miami in the early 1980s, he made sure to use each of his allotted 25 rounds per year as a guest at Seminole. He won the first member-guest he played in 1979 as a guest of Doc Hoover, who was a frequent playing partner of Ben Hogan’s and “everyone’s favorite orthopedic in town.”

When Crosby last captained the Americans at Royal Liverpool in Hoylake, England, there was significant personal history, too. Crosby was a member of the U.S. squad that won there in 1983.

“I can’t really say I’m more excited about it because Hoylake was my first and, you know, had the history there but being that I’m at home and down the street, it’s a phenomenal opportunity for me to have a special experience in front of my homies and family,” Crosby said. 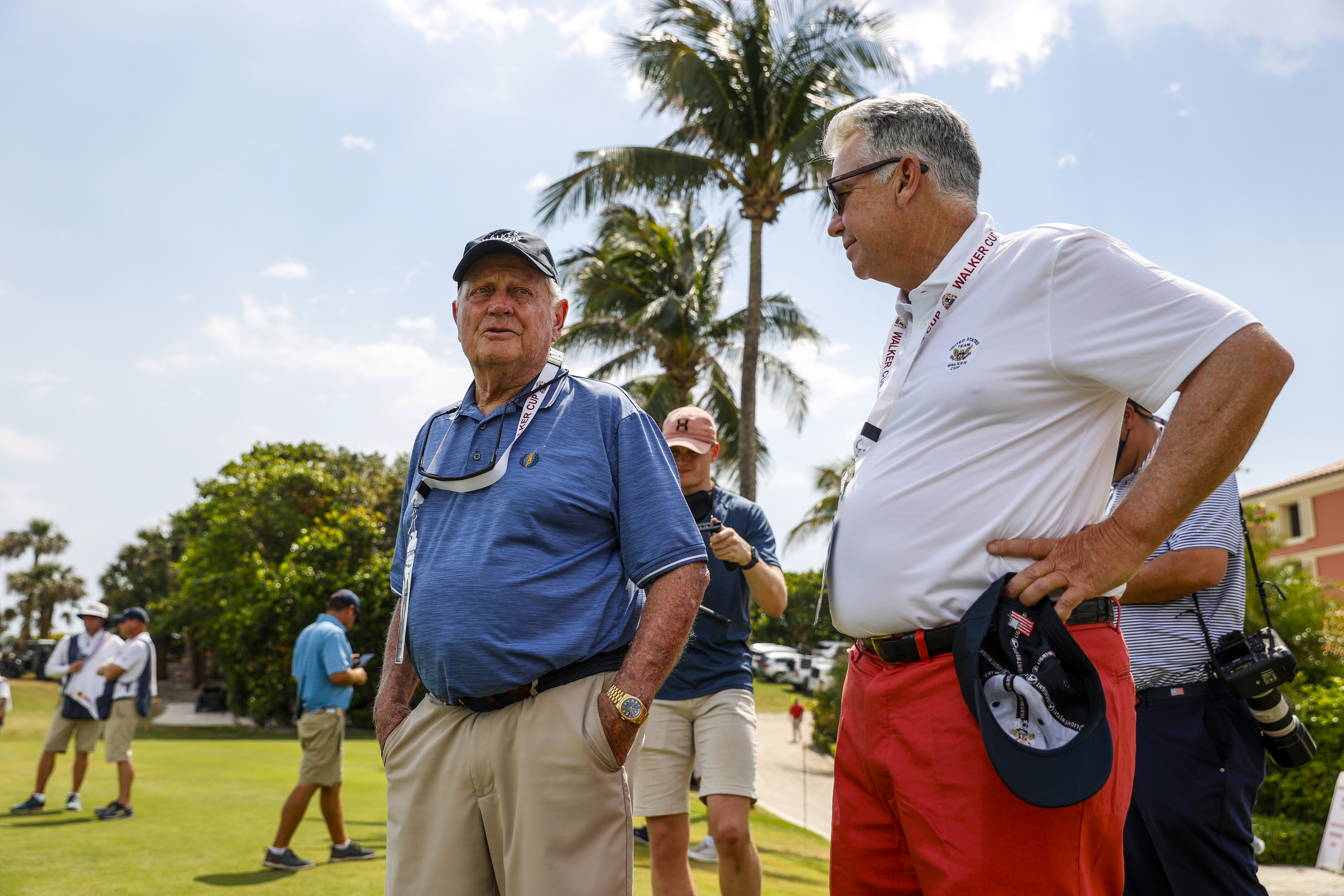 Jack Nicklaus and U.S. Team Captain Nathaniel Crosby chat during a practice round at the 2021 Walker Cup at Seminole Golf Club. (Chris Keane/USGA)

Many golf fans got eyes on the iconic Donald Ross design in May 2020, when Seminole hosted the TaylorMade Driving Relief charitable match between Rory McIlroy, Dustin Johnson, Rickie Fowler and Matthew Wolff.

Hagestad expects the course to show well again this month.

“Depending in the wind and the conditions, it will play differently every day and … obviously changing tee markers and kind of how it’s all playing, they have such a great level on where it is for the day,” he said. “The course knowledge that’s there, just kind of the golf IQ of the membership and the genuine care that they have for it, it’s pretty spectacular.”

Traditionally, the Walker Cup is played in early September, but was moved to May to avoid Florida’s hurricane season. The two-day matches fall squarely in the college golf postseason – with conference championship having just wrapped up and NCAA Regionals set to begin May 17.

Eight of the 10 players on the U.S. team are currently on a college roster. Five of the GB&I players currently play college golf in the U.S.

In the aftermath of the American’s comeback victory to defeat GB&I on home soil in 2019 – the first road win for a U.S. team since 2007 and just the second since 1991 – Crosby referenced foursomes preparation as being a key part of his team’s preparation. Crosby said he got an idea of pairings for this week from a December practice session, and as players came in and out of Seminole in the lead-up to the matches. 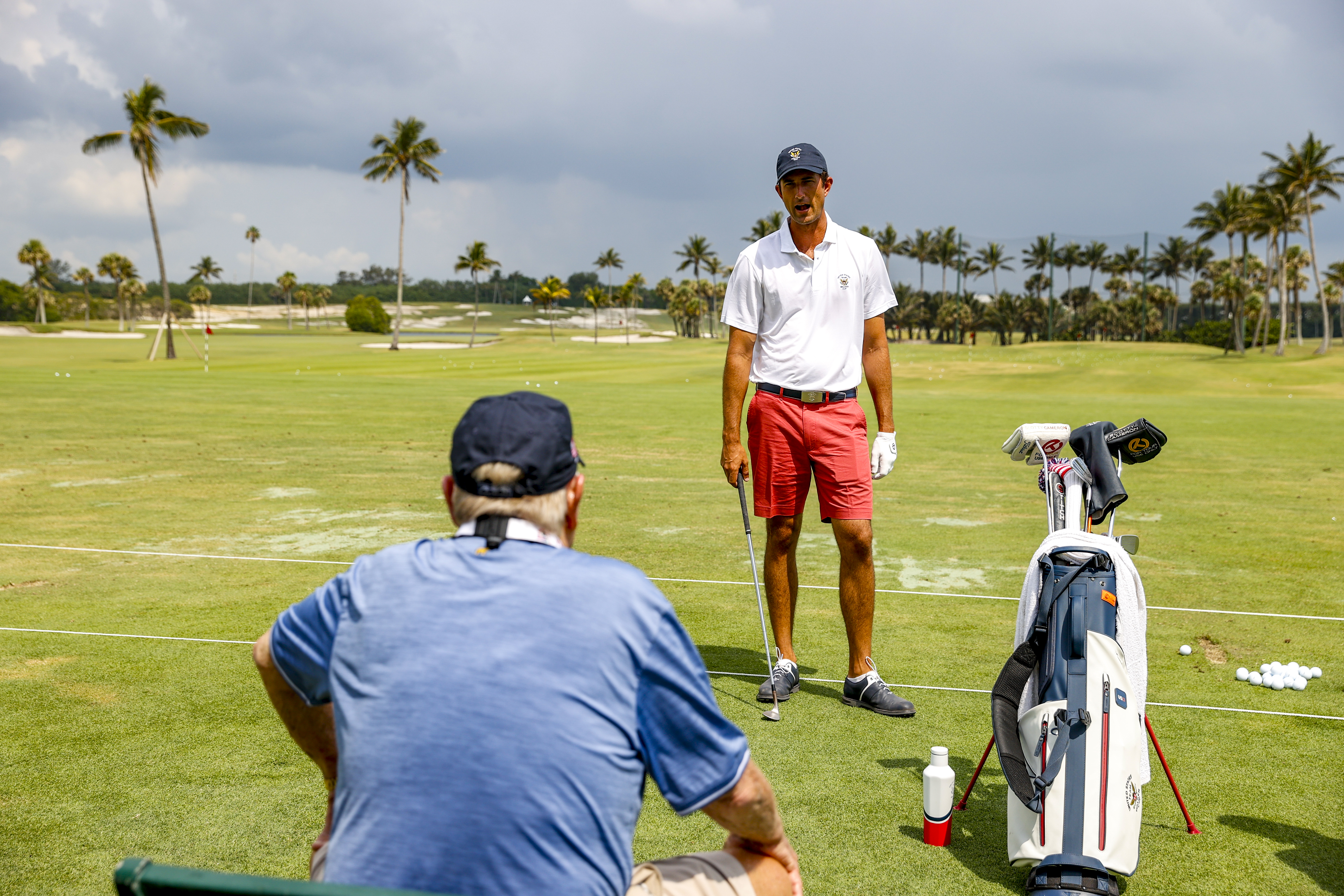 Jack Nicklaus and Stewart Hagestad chat during a practice round at the 2021 Walker Cup at Seminole Golf Club. (Chris Keane/USGA)

Each day begins with four foursomes matches between eight singles matches on Saturday afternoon and 10 on Sunday afternoon. In 2019, the U.S. won four and a half of a possible eight points in foursomes.

That year, Hagestad paired twice with then-17-year-old Akshay Bhatia, the youngest player ever selected to a U.S. Walker Cup team. At Seminole, Hagestad said, it’s important to pair with someone who complements your weaknesses.

“It’s not like we haven’t played it before, I think we’ve just been outplayed,” Hagestad said candidly on the format. “It just comes down to play better.”

The Americans did that, too, in 2019. The two-day matches can go by quickly. There isn’t time to waste.

“In match play, you have to come out swinging, you can’t kind of get into the rhythm of it.”

Walker Cup: Is this the last hurrah for Stewart Hagestad?

U.S. Walker Cup team is set for May matches at Seminole; includes 8 collegians, 3 returners from 2019