Rory McIlroy and Peacock, NBC’s streaming service, announced on Wednesday that a new GolfPass channel will launch Feb. 8, featuring instruction and entertainment content from GolfPass as well as timely news each day from Golf Channel.

GolfPass, which was developed in partnership between McIlroy and NBC Sports Group, is a direct-to-consumer subscription program that offers more opportunities to play golf, comprehensive tools to improve your game and high-quality video content.

“Being able to share all the great things about the game I love with as many people as possible has been a passion project of mine through GolfPass,” said McIlroy, who will sport the Peacock logo on his golf bag from this weekend’s Waste Management Phoenix Open through the end of the year. 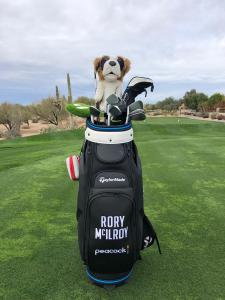 “After finishing a record-breaking year, I can’t think of a better next step for GolfPass than being part of the amazing momentum surrounding Peacock.”

The new channel will feature a sample of what’s available via a GolfPass membership, including golf improvement videos, series like Feherty and Big Break, as well as GolfPass originals like The Conor Moore Show. The channel will be programmed for 24 hours a day and will also feature original programming produced with McIlroy, including the popular Ask Rory instructional series.

After a 10-week hiatus following the November Masters, McIlroy returned to play with a third-place finish at the European Tour’s Abu Dhabi HSBC Championship two weeks ago and then found himself in an embedded ball situation similar to that of Patrick Reed at last week’s Farmers Insurance Open.

After this week’s Waste Management Phoenix Open, McIlroy will take a week off before playing four straight events, finishing with the Players Championship. He’ll also play the WGC-Dell Technologies Match Play in Austin, Texas, as well as the Masters, meaning he will have played nine times in a dozen weeks to start the year.