One week after Max Homa won the PGA Tour’s Genesis Invitational in Los Angeles, not far from where he grew up, another hometown hero is in the thick of it at the Puerto Rico Open.

Rafael Campos, 32, must be enjoying some home cooking as he carded seven birdies and just one bogey en route to an opening-round 6-under 66 at Grand Reserve Country Club in Rio Grande, Puerto Rico.

“I really do feel more comfortable being out here,” said Campos, who was part of a four-way tie at the top of the leaderboard among the early finishers. “I understand where I can miss the balls and fully have good looks to make up-and-down. I’m actually very relaxed.”

Campos’s stellar start was shades of 2016 when he opened with a 64 and became the first Puerto Rican golfer to lead a Tour event since World Golf Hall of Famer Chi Chi Rodriguez won the Tallahassee Open in 1979. Campos stayed in the trophy hunt that year until Sunday, notching a T-8 and finished T-10 a year later. He’s only made the cut in six of his 11 starts at the Puerto Rico Open, but said he’s finally figured the course out.

“I normally play a little left-to-right shot, but this course actually has a lot of left-to-right wind, so it’s actually tougher for me,” he explained during his pre-tournament interview. “But I actually realized I found different ways to play this course and I really feel comfortable now. I know where to attack, where not to attack.”

It also had to be good for Campos to simply be back in a place with positive memories. He missed playing in the tournament for the first time in the tournament’s history last year due to a torn muscle in his back.

“It was really hard for me,” he said.

But he really had no choice. The injury prevented him from swinging a club until August, six months later. Since his return, Campos has been mired in a slump. He’s missed his last four cuts and seven of his eight starts this season on the PGA Tour. But he showed signs of breaking out of his rut, tying for seventh at the Korn Ferry Tour’s Lecom Suncoast Classic on Sunday.

“I knew I was really close,” he said, “so, seeing last week things kind of click into place a little bit more and finish in the top-10 over there at the Korn Ferry, giving me a chance to actually win a tournament, really nice to feel the nerves again.”

Campos has made a steady climb as a pro, spending 56 starts on PGA Tour Latinoamerica and 84 starts on the Korn Ferry Tour before earning his PGA Tour card for the first time in the 2019-20 season. A strong result this week would go a long way to maintaining his current membership status. Sidney Wolf, president of the Puerto Rico Golf Association, has even grander ambitions.

On a windy Thursday, Campos was tied at the top with veteran Robert Garrigus, who birdied four of his first six holes, and a pair of Korn Ferry Tour stars, Taylor Pendrith and Lee Hodges, who are out to prove they’ve got game too.

“I would say top to bottom – obviously we’re not as strong as out here, but we can compete. Any week, anybody from the Korn Ferry could win out here,” Hodges said. 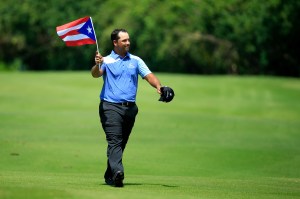 Rafael Campos walks up to the 18th green during the final round of the 2017 Puerto Rico Open. (Photo by Michael Cohen/Getty Images)

Campos, who grew up in San Juan, hit 16 of 18 greens in the opening round. He’s the biggest name in the Puerto Rican golf community and he’s trying to give back through the formation of a First Tee chapter, the youth development program based in the U.S.

“I think it’s something that’s mandatory and necessary here on the island,” Campos said. “I believe this is a great opportunity to kind of showcase and implement golf into schools, into areas that don’t know anything about golf basically. You never know if the next Tiger Woods is actually coming from these areas.”

There would be no greater spark for golf in Puerto Rico than a hometown victory. Campos has threatened before and a promising start lends hope that this could be the year for his big breakthrough.

“I hit the ball very well, gave myself a lot of great looks. Wasn’t really aggressive today, which I think that was a key, just kind of tried to play my way around the course,” he said. “Hopefully tomorrow we’ll try to do the same thing, hit the ball the same way.”