One of the perks for Tim O’Neal after winning the Advocates Professional Golf Association Tour’s season-long point standings title in 2020 is driving something much larger than a golf ball.

The professional golfer, a Savannah native and resident, earned a one-year lease on a 2021 Lexus ES 350 F Sport sedan as he travels to some 35 tournaments in the coming 12 months.

O’Neal was awarded the leased car from Chatham Parkway Lexus as part of the APGA Tour’s national sponsorship with Lexus.

The 48-year-old former Georgia Amateur champion is a veteran of multiple tours around the world and has started two PGA Tour events, including the 2015 U.S. Open. In 2020, he topped the Lexus Cup Point Standings (adding to his 2018 title) by excelling both before and after the global pandemic-related worldwide shutdown. O’Neal won the APGA Tour Farmers Insurance Open Invitational special event in San Diego last January and then the APGA Tour at Dubsdread in Orlando in July. 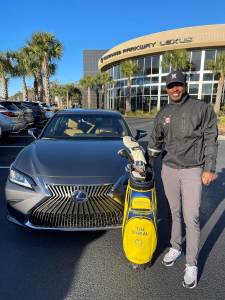 As the mini-tour for minority pro golfers returned with a stretch of six events in 10 weeks to close the regular season, O’Neal finished no worse than third in any of the APGA Tour Lexus Cup Tournaments and topped the field with 1,858 points. He was awarded the $17,500 Lexus Cup Point Standings bonus following his second-place finish at the APGA Tour Championship on Sept. 2.

“It’s great to be rewarded for winning the APGA Tour Lexus Cup Point Standings title,” O’Neal said in a press release after picking up the keys from Chatham Parkway Lexus sales manager Mike Wells. “I put in a lot of hard work in 2020 and it showed in the APGA Tour events.”

“What’s cool is that this is a great Savannah story,” said Wells, also Savannah born and raised. “I remember Tim from his days as a top amateur.  Tim and (PGA Tour Champions player) Gene Sauers are the pride of Savannah golf.  We wished Tim good luck on the 2021 season and promised him he’d have a smooth ride along the way.”

“It’s huge to play at Torrey Pines, in those conditions, alongside a PGA Tour event,” O’Neal said. “I like the golf course. I’ve been hitting the gym pretty hard and my game is in a good spot.”

He is expected to play 10-plus APGA Tour events and selected other events throughout the year as he refines his game for a shot at the PGA Tour Champions circuit for players 50-and-over in 2023.