She bombs it: Chloe Kovelesky, 14, youngest golfer to qualify for 2021 U.S. Women's Open at Olympic Club

On Chloe Kovelesky’s first birthday she took her first step. Her father, Richard, cut down a putter and wedge that same day. Even before she could walk, Chloe used to scoot across the floor smacking golf balls.

“I think she came out with a golf club,” joked her mother, Tina.

Now, at age 14, Chloe is the youngest player in the field at the 76th U.S. Women’s Open, having qualified May 11 at Banyan Cay Resort & Golf in West Palm Beach, Florida, with two rounds of 70. Chloe had mentor Morgan Pressel’s longtime caddie Barry “Rock” Cesarz on her bag. Growing up in Boca Raton, Pressel has long been Chloe’s favorite golfer.

“She fits my motto,” said Chloe, referring to the line that tops her Instagram account: You have to be a great person before you can be a great champion. 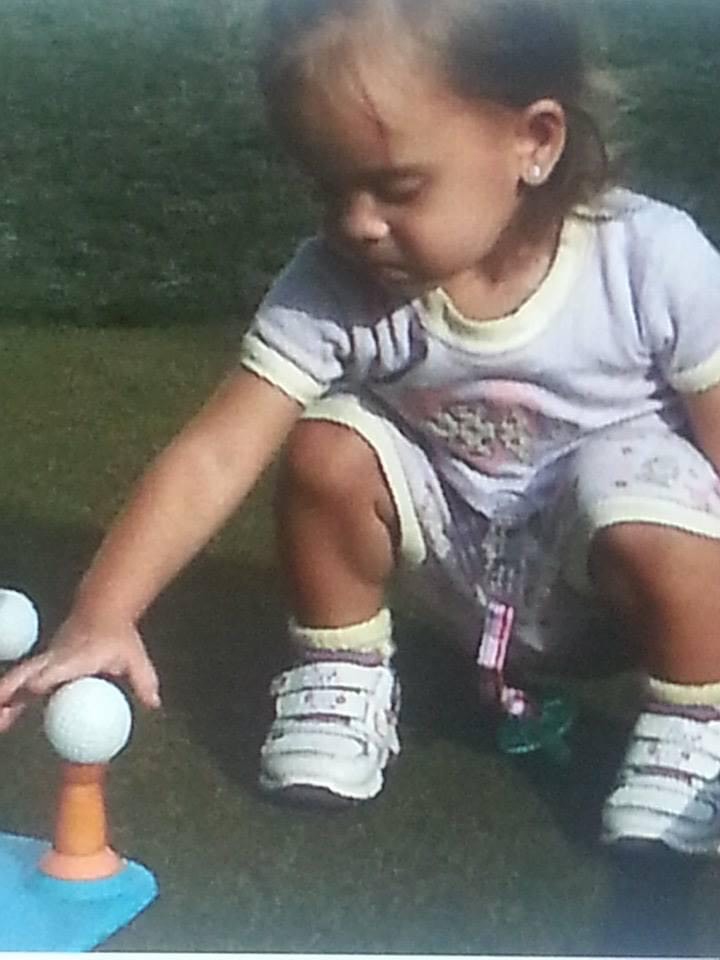 A young Chloe Kovelesky works on her short game in the family’s backyard (courtesy photo).

Richard tried to build a putting green in the backyard but Tina didn’t want Chloe playing in the dirt while it filled in. It wasn’t long before an artificial green with six holes was built to keep young Chloe occupied. The family’s chocolate lab Charlie grew up with Chloe, always eager to retrieve golf balls.

At age 5, the Koveleskys moved to Boca Woods Country Club after Chloe outgrew the backyard net.

“Every weekend our neighbor would bring me a bag full of golf balls from their pool,” said Tina.

Chloe was 8 years old when Esquire’s “Short Game” debuted, a reality series about young kids and their parents and the road to the U.S. Kids Golf World Championship. (Not to be confused with the Netflix documentary with the same title. Amari Avery starred in that movie and also qualified for this year’s USWO.)

Chloe’s family got to see all the episodes from the Esquire series before they aired.

“She watched the first one,” said Tina, “and said ‘I don’t need to watch anymore. I’ve seen enough.’ ”

Every couple of months someone will recognize Chloe from the series.

“I love being a mentor to kids and I want them to be able to look up to me and be able to know it’s not just about winning,” said Chloe. “It’s about being kind and being nice to people.”

Chloe isn’t exactly all grown up now, but she does consistently hit the ball between 280 and 290 off the tee. When she turned 14 in January, her parents got her a golf cart for her birthday. She keeps two rubber ducks on the dash and is careful not to drive with her air pods in.

Meet Chloe Kovelesky. At age 14, she’s the youngest player in the field at @uswomensopen.

Consistently drives the ball between 280-290. pic.twitter.com/7gKjemsEBF

Chloe, who is part of the class of 2025 and ranked 939th in the World Amateur Golf Ranking, is homeschooled and typically heads out to practice at 7:15 a.m. When it starts to get hot, she heads back in for lunch and schoolwork and goes back out in the afternoon.

Professional golf isn’t new to Chloe, who has made 11 starts on the Florida mini-tour circuit with six top 5s and a victory at a National Women’s Golf Association event back in February with rounds of 74-70-70 at Black Bear Golf Club.

Still, nothing quite like a Women’s Open, where familiar faces at The Olympic Club in San Francisco June 3-6, will help her to feel more at ease. Pressel, who at age 12 became the youngest to qualify for the USWO, will be there working for NBC. Chloe also keeps in touch Christina Kim and Lexi Thompson, who later broke Pressel’s record.

“I love being able to be there and kind of see what my future looks like.”