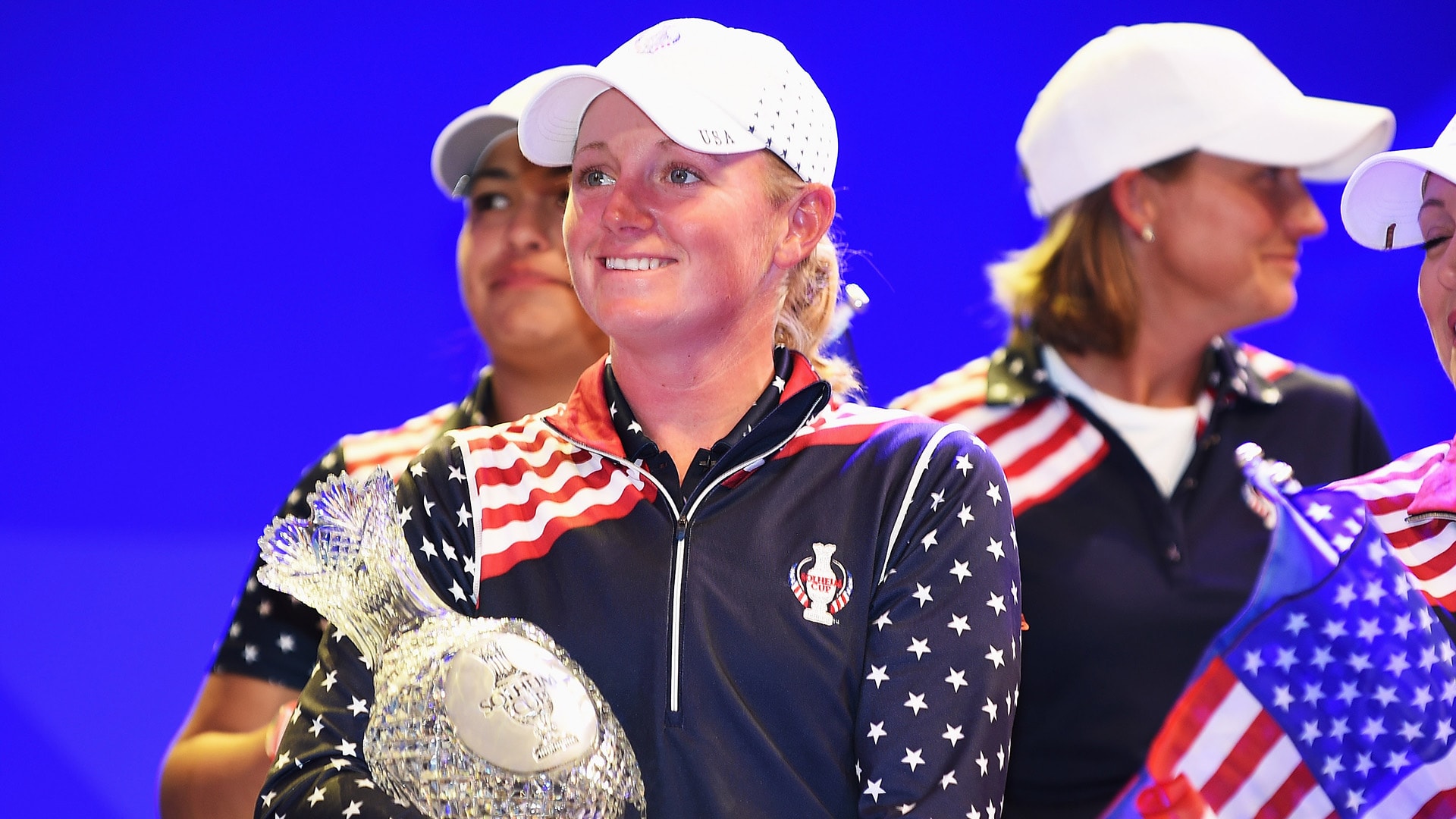 Lewis, who will be 38 years old when the biennial matches are contested in Spain two Septembers from now, was officially announced Wednesday morning as the next American captain. She will be the youngest ever to lead the U.S. side and second-youngest captain in Solheim Cup history behind only Catrin Nilsmark, who was 36 when she led Team Europe in 2003.

Lewis has been sitting on the secret for about a month – she was first notified in December that she was on the short list of options before LPGA commissioner Mollie Marcoux Samaan called to offer Lewis the job the first week of January.

But she’s already gotten to work.

Stacy Lewis, 36, explains why now was the right time to be Solheim Cup captain

It’s been mostly listening, as Lewis, an assistant captain for each of the past two Solheim Cups, has picked the brains of past captains Juli Inkster, Meg Mallon and Pat Hurst. She also has leaned on LPGA officials to help draft her a to-do list and recommended playing schedule.

“I know kind of how everything works the week of the Solheim, the pairings and that sort of stuff,” said Lewis, who has qualified for five Solheim Cup teams (she withdrew because of injury in 2019 before transitioning to an assistant role at Gleneagles). “I just don’t know exactly how the preparation part goes and the steps we need to take, so I’m going to rely on them.”

With that said, Lewis, mother of now-3-year-old daughter, Chesnee, still plans on competing as much as she can, to be around her prospective players – especially the rookies – but also in hopes of potentially serving as a playing captain. The former world No. 1, who currently is the player director for the LPGA Board, is still ranked in the top 50 of the Rolex Rankings (No. 46) and has notched two top-8 finishes in each of her past two starts on the LPGA.

Lewis wants to have ‘fun’ as Solheim Cup captain

“I always thought when I was captain I would not be playing,” Lewis said. “I would say the last two weeks have definitely changed my view on that, coming out the way I’ve played the last month or so. But I’m not going to say yes or no either way right now. If it gets to sometime next summer and my name is still on that points list and I’m in the mix, and if I need to build the best team possible and my name is a part of that, then I’ll do it.”

As for her captaining style, Lewis hasn’t thought that far ahead. She does plan to “keep the concept of” the pod system that recent captains have employed, but she also wants to add her own touch to provide more flexibility.

“I just felt like, especially last year, we didn’t have a whole lot of options with our pairings as things kind of started to happen,” Lewis explained.

It’s such thoughts that Lewis has been jotting down in a notebook for the past few weeks. She takes it everywhere she travels and even sets it besides her bed.

Whenever she thinks of something, she writes it down.

“It’s all going to help me formulate a plan for the next 18 months,” said Lewis, who will attempt to end Europe’s recent run in the event – the U.S. has lost two straight and four of the past six Solheim Cups. She’ll also be going up against first-time European captain Suzann Pettersen, a nine-time Solheim Cupper who has won 18 matches and four Cups.

Meanwhile, Lewis, 5-10-1 in her Cup career, has been a part of just two winning teams.

Lewis told a story from one of those wins, the 2015 Solheim Cup in Germany, where Inkster, then the captain, had Lewis, one of her star players, help her with the singles lineup.

It was also Inkster who said to Lewis recently, “You’re ready for this.”

“That’s the biggest boost of confidence I could ever get,” Lewis said. “I feel like the team needs me right now.”