Stanford's Rachel Heck, a favorite to win NCAAs, wants to play on the LPGA while serving in the Air Force

Home Stanford's Rachel Heck, a favorite to win NCAAs, wants to play on the LPGA while serving in the Air Force

PALO ALTO, California – Rachel Heck doesn’t mind getting yelled at during ROTC drills. Truth be told she kind of likes it.

“Today, we talked about the principles of war,” she said last month during an early dinner on Ramona Street in Palo Alto.

She was two days removed from becoming the second player in Stanford history to win the Pac-12 Championship. The next morning, she had a 4 a.m. wake-up call for physical training (lots of pushups). Heck actually goes over to the nearby San Jose State campus for ROTC. She has an aerospace studies class on Fridays.

“One of the main reasons I chose Air Force is because they have a program for professional athletes,” said Heck. “They’ll fully support you, and you can play your sport.”

Heck, a freshman who plans to study political science with a focus on international relations, went on to explain that she’d serve in the Air Force Reserve one weekend a month while on the LPGA and might “occasionally get deployed for a couple months.” 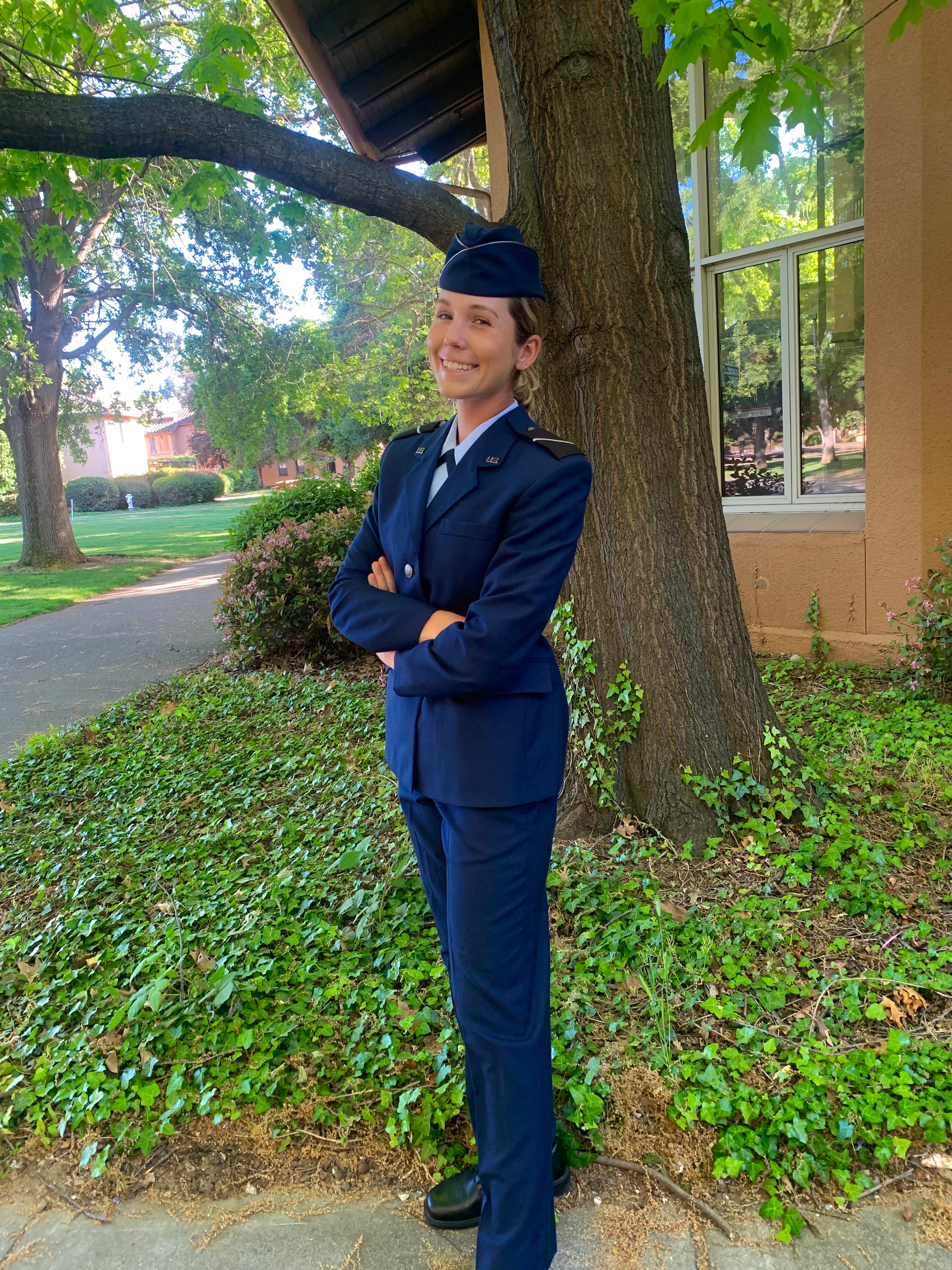 When Rachel Heck graduates from the ROTC program at Stanford she’ll be a Second Lieutenant in the United States Air Force (courtesy photo).

Let’s backtrack for a second and talk about Heck’s golf résumé. The Memphis native arrived on campus at Stanford in February and has won five titles, including her last four starts. She has a 69.67 scoring average, on pace to shatter the single-season record held by Andrea Lee (71.36). She’s currently ranked No. 1 by Golfweek and a heavy favorite at this week’s NCAA Championship at Grayhawk Golf Club in Scottsdale, Arizona, May 21-26, having just won both conference and regional titles.

Folks have already started to wonder how long Heck will last at Stanford, and she’s only been on campus for one semester.

“I do believe she has all the tools to be a superstar,” said Cardinal head coach Anne Walker.

Heck’s obsession with the military began when she started dating Sam Killebrew. The romantic West Point sophomore threw a prom party in his backyard when the one at St. Agnes’ all-girls school got canceled due to COVID. The backyard was covered in balloons and Killebrew’s mom served sparkling wine juice.

“I’ll probably remember that more than a normal prom,” said the effervescent Heck.

The 19-year-old first approached her parents about joining the military in July after her junior year of high school. The nobility of it, the commitment to serve, held a great appeal.

One day she Googled “Stanford ROTC” to just see what popped up. Heck’s mother, Stacy, feared she’d be spreading herself too thin and said absolutely not.

Rachel pressed on, emailing the commander in charge at Stanford to see if any student-athletes were involved. The response: We’d be happy to work with you. 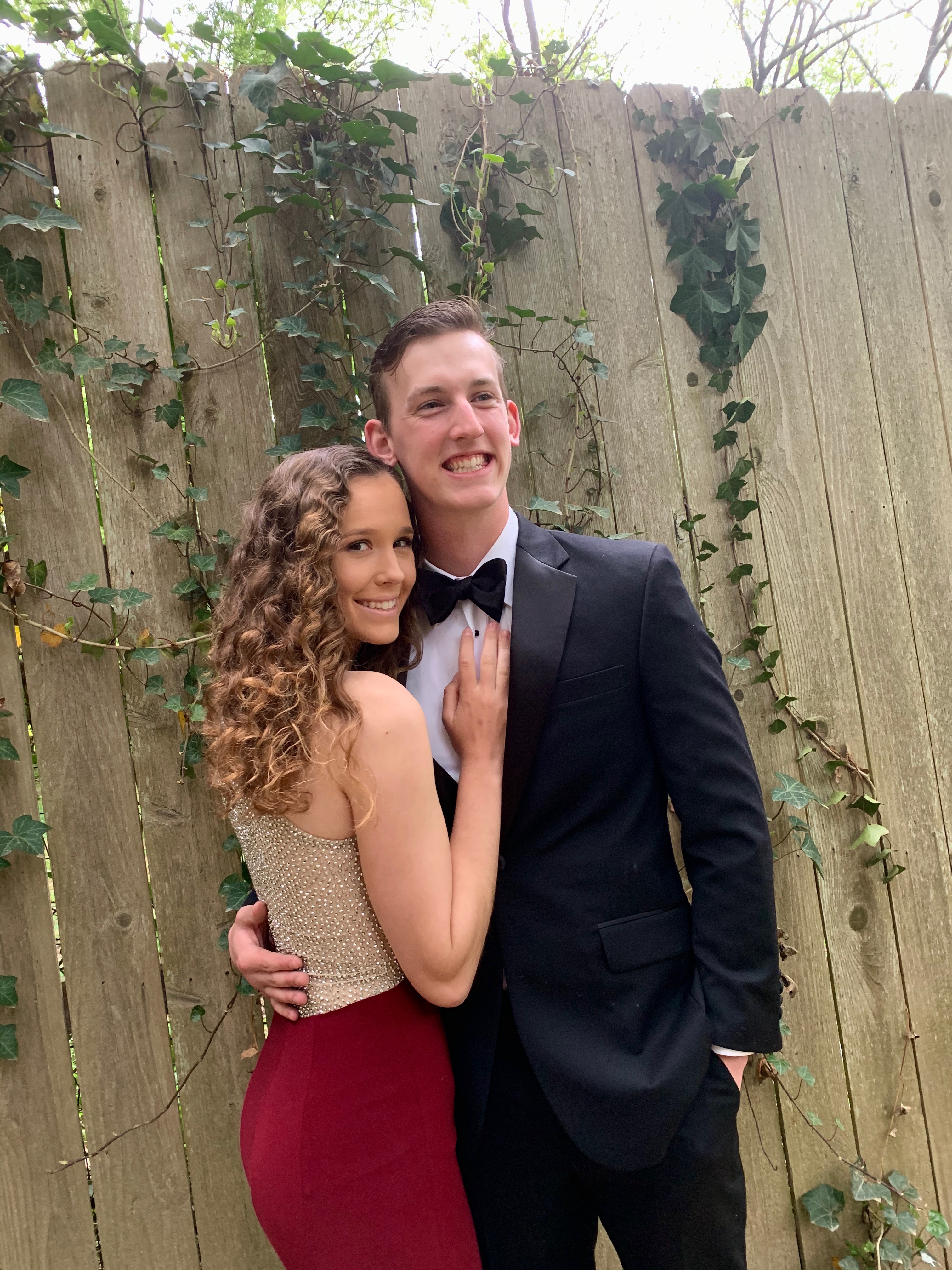 Heck and boyfriend Sam Killebrew at their backyard prom in 2020 (courtesy photo).

Heck went back to her parents with a more forceful pitch. She talked to Walker, too, who said something along the lines of “I want you to do you.” She loves the fact that her players are multi-dimensional.

At the 2019 Solheim Cup in Scotland, U.S. captain Juli Inkster brought in Nora Tyson to talk to the team. Tyson, a native of Memphis, became the first woman to lead a U.S. Navy ship fleet in 2015.

Heck, then a member of the Junior Solheim Cup team, was in the room for Tyson’s speech and hung on every word. She made a beeline for the retired vice admiral when it was over to talk about her Air Force dream.

Hecks’ parents are all in now. Stacy has an Air Force sweatshirt and her dad, Robert, a former college football player, has a workout shirt he proudly wears to the gym.

Rachel has two sisters, Abby and Anna, both fine golfers in their own right. Abby graduates from Notre Dame this weekend and plans to study oncology in medical school.

Right from the start, Abby thought ROTC would be good for Rachel.

“Abby of all people knew that Rachel needed more than golf,” said Stacy. “I think she was afraid that she was going down a path that was all about results.” 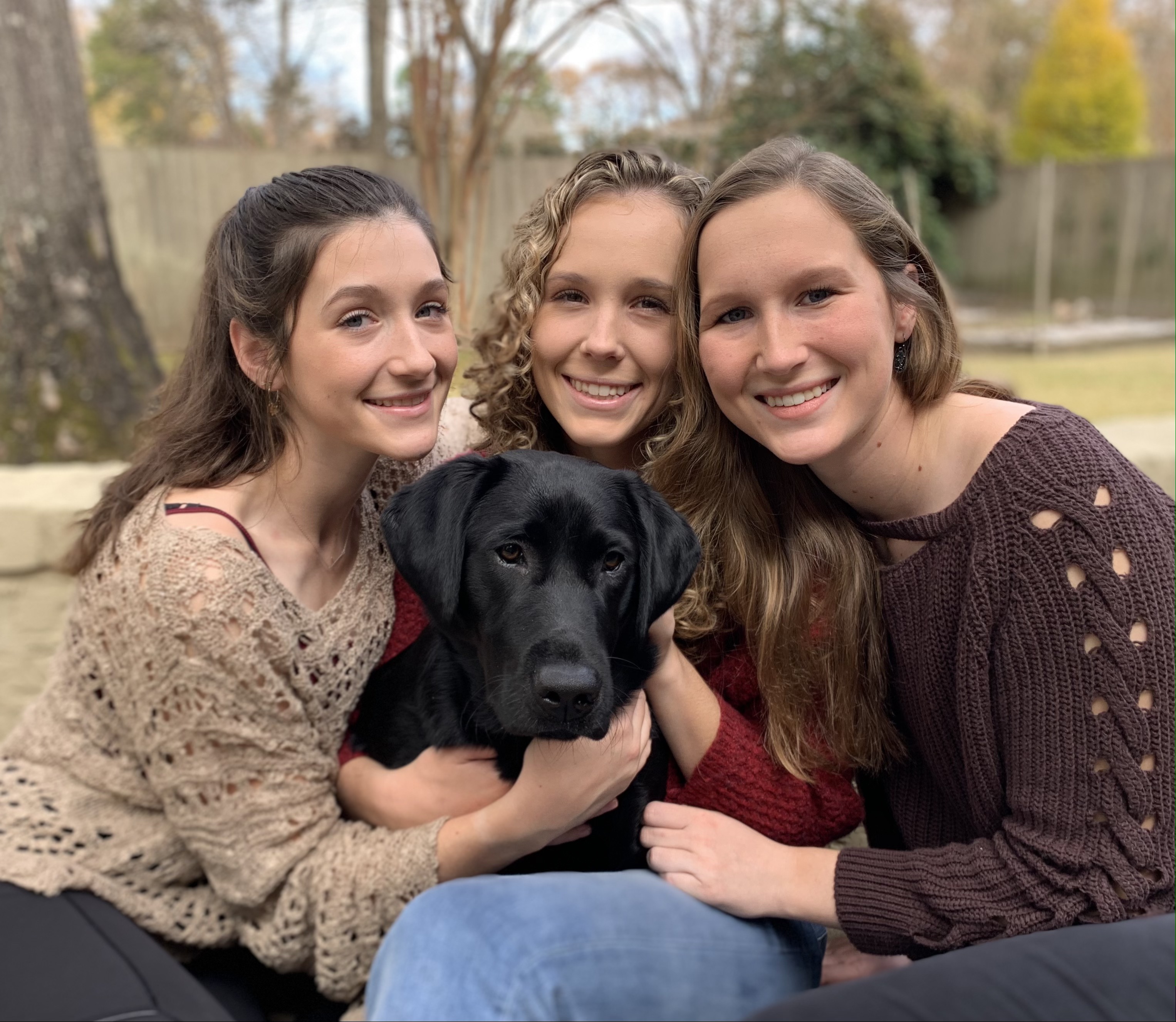 Anna, Rachel, Abby, and their new dog Scout, who all agree was the best part of 2020 (courtesy photo).

Rachel qualified for her first U.S. Women’s Open in 2017 at age 15 and finished tied for 33rd. She was the AJGA Rolex Junior Player of the Year that same season and her father worried that it was too much too fast.

There was a time, Stacy said, when Rachel “felt scared teeing it up.”

Golf, Rachel said, was the “be all, end all” not long ago. She wanted to be the best professional player in the world and if that didn’t happen, well, then she would’ve failed in life.

“In my head,” she said, “it was the most important thing in the world.”

ROTC gave her something else to be passionate about. Took the heat off. When the pandemic canceled her first semester at Stanford, she fell in love with the game all over again when golf returned. Stacy said Rachel appreciates the fact that she has choices. It’s not all about the LPGA.

“There’s no external pressure on her from her core team,” said Walker. “She’s able to play free and has a long-range vision for herself, her game and her life.”

Heck smiles a lot when she competes. She has an easy, infectious laugh and on the surface, one might assume that she’s not the most competitive person in the world. But that would be a mistake. That’s part of the beauty of this complex player.

“My daughter (Emma) just loves her,” said Walker, noting that her 6-year-old melts in her shoes when Rachel is around.

People of all ages are drawn to Heck.

During a recent interview, Heck recited the three core values of the Air Force: integrity first, service before self and excellence in all we do.

She has grown to appreciate the fact that when one person stumbles in her unit, everyone gets scolded. It’s all about the group, she said, it’s about leading people.

“You want to build everyone up around you,” she said, “because you all want to succeed.”

Heck has taken that mentality back to her Stanford team, where playing for something bigger than herself has propelled her into the best golf of her young life. 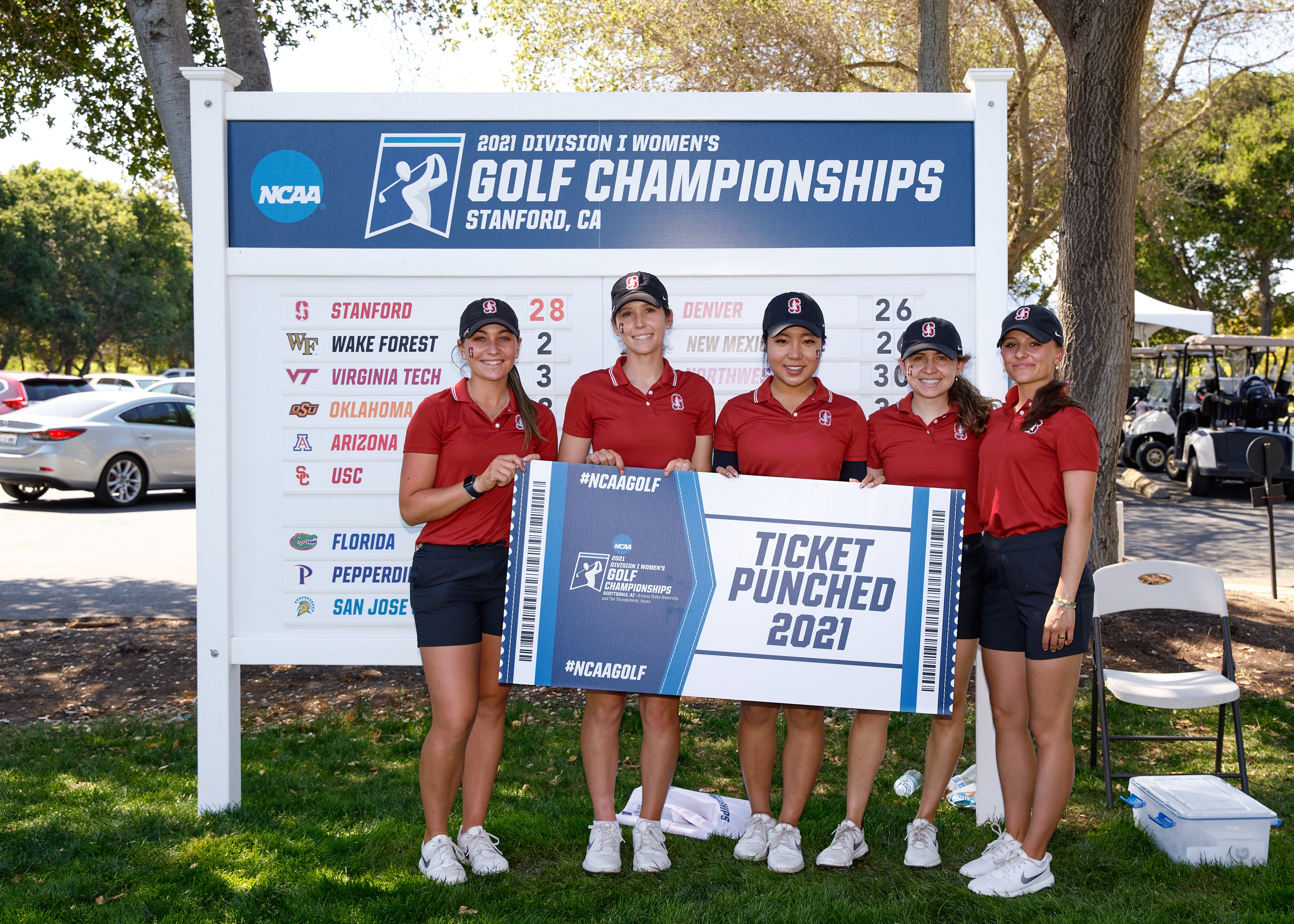 Sadie Englemann, Rachel Heck, Angelina Ye, Brooke Seay and Aline Krauter after the final round of the NCAA Stanford Regional at Stanford Golf Course on May 12, 2021. (Stanford photo)

In between conference and regionals, Stanford played in the Olympic Club Collegiate Invitational, a one-day event at the site of the 76th U.S. Women’s Open. (Heck qualified for her second USWO next month by medaling at Marin Country Club.)

The par-71 Lake Course was set up at 6,610-yards – longer than the USWO – for the intimate event and Heck, one of the longest players in college golf with a great wedge game, chipped in twice en route to a 5-under 66 on a brutally cold day.

The next week she shot 68-67-67 at NCAA Regionals to lead Stanford to a 30-stroke victory. Heck’s latest 10 rounds of collegiate golf have been in the 60s, a stat she had no clue about until mom told her.

In today’s episode of players you need to know …

Working on a story on Stanford freshman Rachel Heck, the hottest player in college golf. Last 10 rounds in the 60s. Ranked No. 1. Longer than heck! Heavy favorite at NCAAs.

Stacy says there’s zero chance that Rachel leaves Stanford early. She could break every record in the program’s books and graduate as a Second Lieutenant. And if there’s anyone who can find a way to play on the LPGA while serving in the Air Force Reserve, mom says, it’s Rachel.

“She’d rather win with a team right now than be off by herself,” said Stacy. “These are things she’ll never get back.”