They said it couldn’t be done. And “they” was virtually everybody – from players to team captains to officials, and in a moment of candor, even golf course architect Pete Dye had his doubts.

Build a Ryder Cup venue under the tightest of deadlines from scratch in the middle of swamp and marsh? Why, yes. That’s exactly what they proposed doing. The PGA elected to move the 1991 rendition of the biennial competition from Palm Springs, California, to Kiawah Island, South Carolina. Sounds outrageous? Well, it was. And that’s not even taking into account all the adversity the project faced from environmental concerns to Hurricane Hugo pummeling the three miles of isolated seashore 25 miles southwest of Charleston.

“If you were prone to panic,” said former PGA executive director Jim Awtrey, “this would’ve put you under.”

And yet somehow, despite all the forces seemingly working against it, Dye transformed The Ocean Course into one of America’s premier seaside links courses and the 1991 Ryder Cup was an unmitigated success. Like a sports referee who is celebrated for not being involved in the game’s decision, the incredible story of the preparation of Kiawah’s Ocean Course has been forgotten, replaced by the indelible image of Germany’s Bernhard Langer missing the final putt in the final match on the final hole to give the Cup to the United States. “The War by the Shore” put Kiawah on the map, and its fame has proved to be lasting. 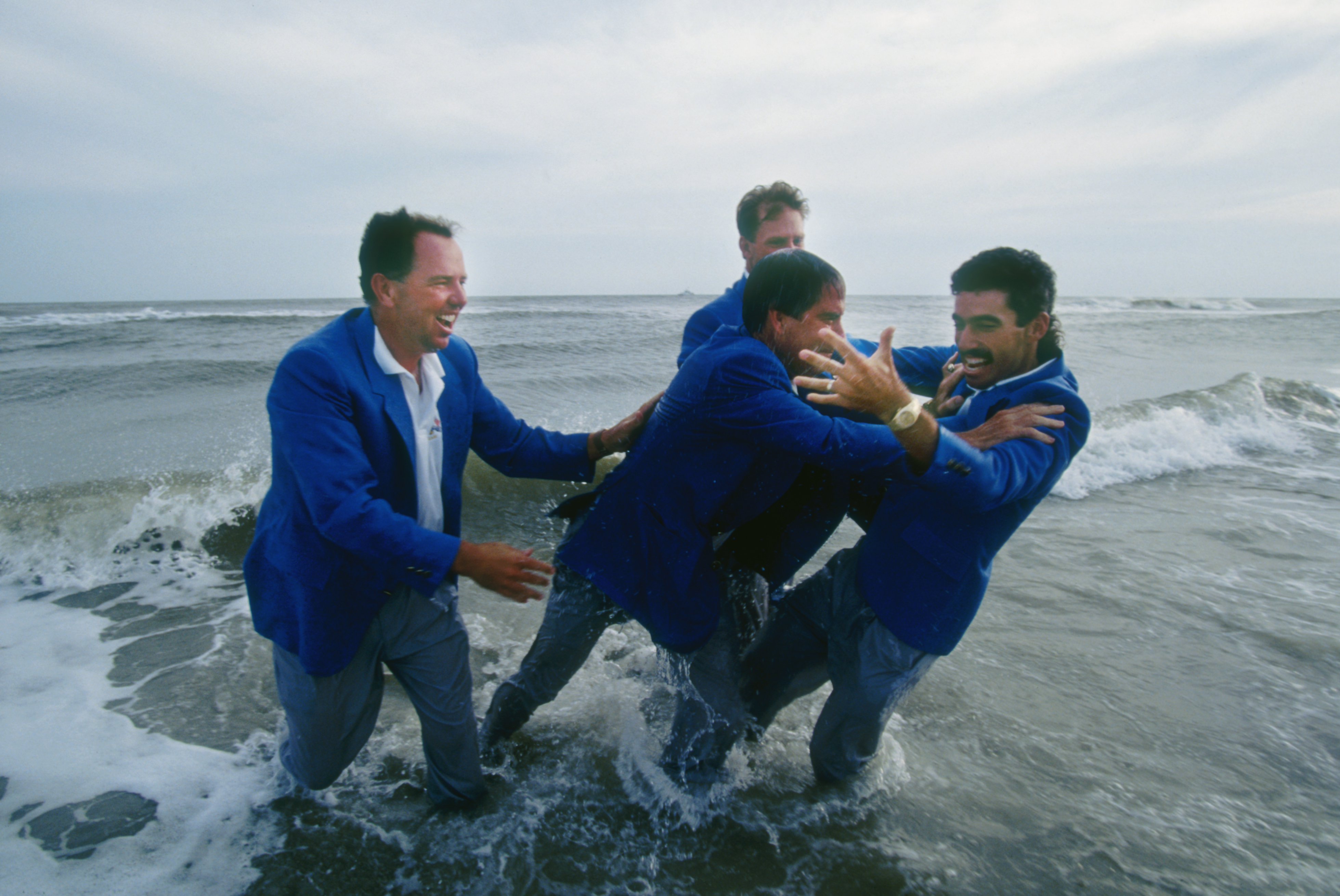 Mark O’Meara and Payne Stewart look on as team captain Dave Stockton pushes Corey Pavin into the water as the USA celebrate on the beach after victory in the Ryder Cup at Kiawah Island in South Carolina. (Photo by Simon Bruty/Getty Images)

The story of how The Ocean Course came to host one of golf’s premiere events is filled with nearly as much drama as the Cup itself. Initially, the 1991 Ryder Cup was scheduled for PGA West in La Quinta, California, as part of a broader licensing deal negotiated between the PGA of America and Landmark Development Co. When Awtrey became the PGA’s executive director in 1987, he expressed concerns whether the Ryder Cup could succeed in the desert in September. It’s a time of year when residents are still hibernating, temperatures soar to 110 degrees, and courses don’t get overseeded until October.

“Add all those things up and it didn’t seem like it was going to be a successful event,” Awtrey said.

Previous accounts have centered on television’s role in the decision to move the tournament. And that is true. Awtrey targeted television as the centerpiece of his strategic plan to grow the PGA. The 1991 Ryder Cup marked the first time the PGA received a television rights fee. As a signal of its rising importance in the golf landscape, NBC signed on as broadcast partner for the weekend telecast with USA Network covering Friday.

The BBC insisted the Ryder Cup was an international event and consideration should be given to the vast European audience, too. A five-hour time difference was bad enough, but eight – if played on the West Coast – would diminish interest. With the lure of 21 1/2 hours of live coverage during prime viewing hours, Awtrey’s board gave him permission to consider moving the event to the East Coast. So Awtrey visited Joe Walser, Landmark’s co-founder, and the man who gave him his first job in golf. Awtrey ticked off his list of reasons why the event was better suited to be played in the Eastern Time Zone and asked Walser to release the PGA from its contract.

“He looked at me and said, ‘I don’t think we can do that,’ ” Awtrey recalled.

Eventually, Walser offered a solution. Landmark had just purchased a new development in the Carolina low country. There was some skepticism, recalled Pat Reilly, a member of the PGA board at the time, that two years did not allow sufficient time for construction, but the PGA agreed to the move. For the first time, the Ryder Cup had been awarded to a course that didn’t exist.

Instead of an old course they settled for an old architect, joked Dye. Walser phoned Dye, who had designed Oak Tree CC, site of the 1988 PGA Championship, for Landmark in August 1988. When Dye first arrived at Kiawah, he knew he had his work cut out for him.

“I was looking at a swamp and they said, ‘We’re going to have the Ryder Cup here in two years.’ I didn’t say anything. You couldn’t walk into it. It was that bad,” Dye recalled.

Some might have called it impossible to carve a course out of these seaside dunes. But Dye also realized Kiawah’s potential. In one direction were unspoiled ocean views, to the other saltwater marshes. “I’m like a kid with a lollipop,” Dye said at the time. “This is the best piece of land that I have worked on in the Northern Hemisphere.” 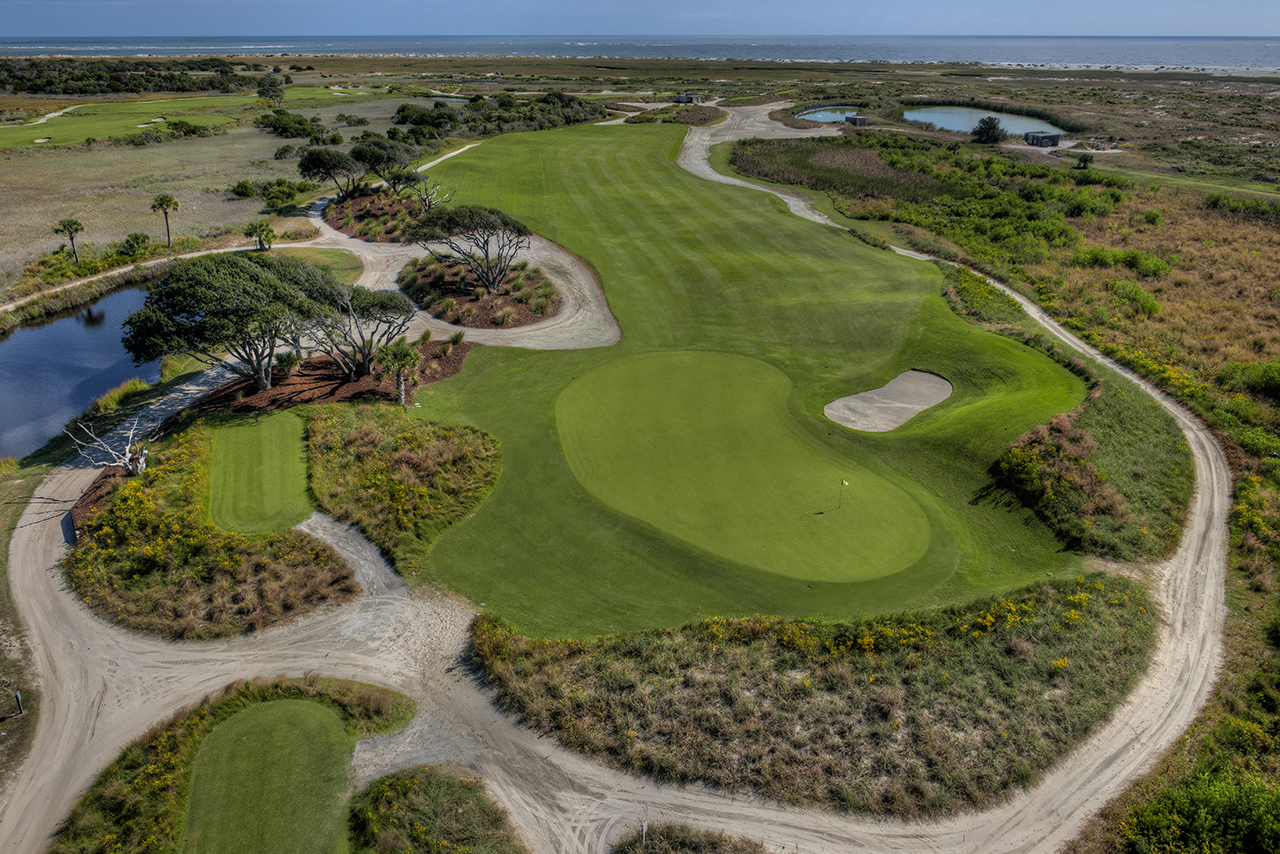 Before long, Dye began pointing out potential holes to Awtrey.

“See Jim, it doglegs off to the right and the green’s up by that mound right there,” remembered Awtrey. “And I said, ‘Pete, I don’t see anything but sand and marsh.’ “

Dye envisioned a routing where the front nine holes would loop counterclockwise to the east and the back nine would loop counterclockwise to the west. He sketched 10 holes of this resort course right along the Atlantic Ocean. After a lengthy permitting process, they turned the first shovel of soil in July 1989. Dye and his wife, Alice, moved to Kiawah. Everything was progressing swimmingly when Hurricane Hugo hit in late September 1989. At the time, the Ryder Cup was being contested in England. From a continent away, Awtrey and his staff watched as Hugo destroyed much of Dye’s design work.

Back at Kiawah Island, evidence of Hugo’s fury was ever-present. Trees had blown down. Access roads were closed. Sand dunes were pummeled. Dye used a rowboat with an electric motor to navigate the course and get fuel and water so they could continue working.

Growing concern resurfaced that the course would never be ready to host the Ryder Cup. Despite the setback, workers patched washouts and transplanted more than a million plants. The core of engineers permitted Dye to reconstruct the dunes line. For months, a battalion of workers toiled nearly around the clock. Dye was often right alongside the laborers, steering a bulldozer, clearing brush, raking a finished green.

The PGA also moved the 1990 PGA Cup matches, a Ryder Cup-format competition for club professionals, from PGA West to Kiawah’s Quail Point in September. With a year to go until the Ryder Cup, this gave European officials a chance to preview the site. To a man, every person who visited the Ocean Course agreed it would never be in proper condition in time. European PGA executive director John Lindsey was the most vocal, informing Awtrey in a meeting that he intended to tell his side to cancel their travel plans.

“That was probably as upset as I got in the early years,” Awtrey said.

It wasn’t just the other side that had their doubts. After the 1991 Masters, U.S. team captain Dave Stockton invited prospective team members to Kiawah. Awtrey tried to persuade him to wait. The course had just been seeded and the greens weren’t ready. Word could spread that the course wasn’t either. Stockton came anyway. 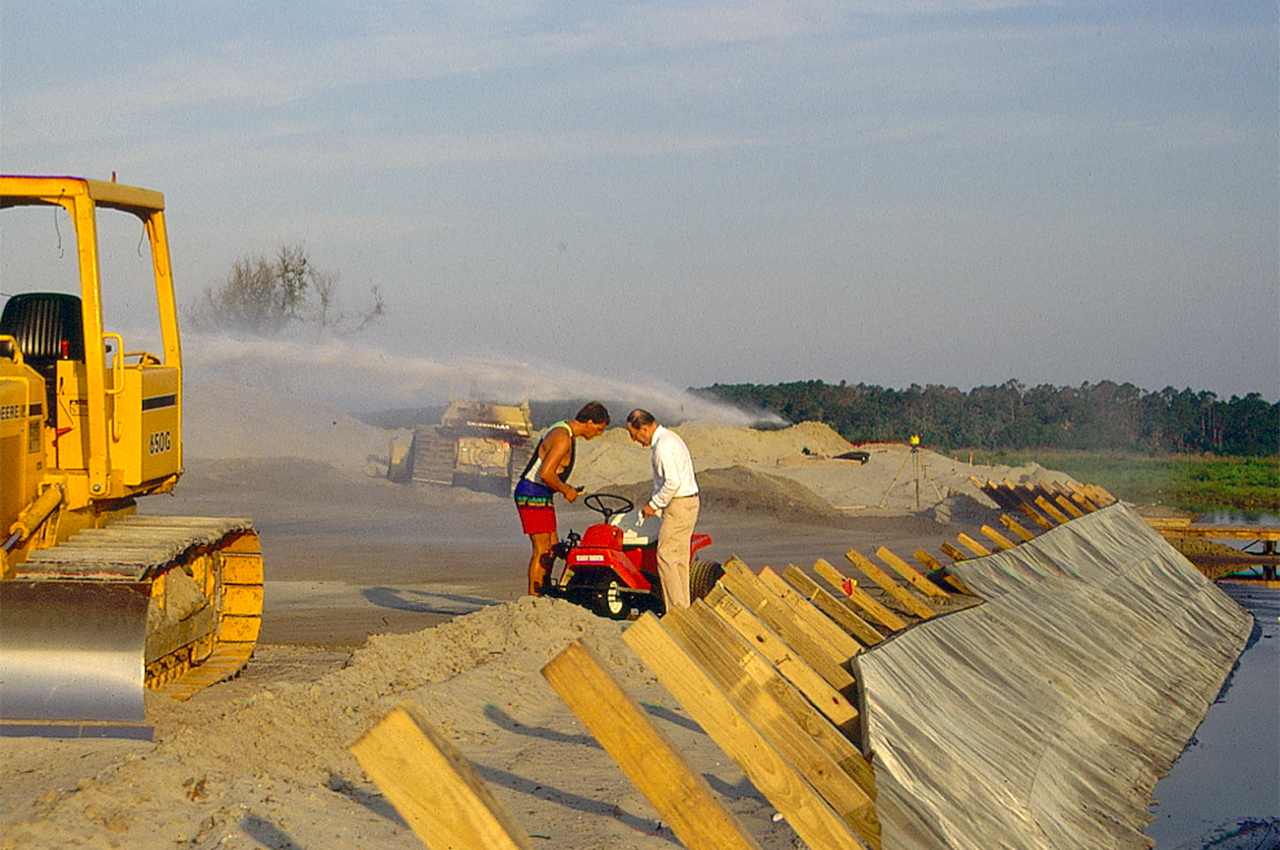 What the players didn’t know was that Bermuda grass grows quickly in the south. By September, the course was ready. Team member Raymond Floyd called The Ocean Course “a masterpiece.”

When Awtrey attended the 1991 British Open in July, he brought 8×10 photos that showed the clubhouse facility was complete and serving meals. A newly constructed four-lane road was paved a few weeks before the Ryder Cup got underway. Under great duress, everything fell into place.

“Could we do it today?” Awtrey said, noting how big the Ryder Cup has since become. “No way.”

“Everything was going against it,” said Joe Steranka, a senior director under Awtrey at the time of the 1991 Ryder Cup who later replaced him as executive director, “and yet somehow they pulled it off and it became one of the great spectacles in all of golf.”

How to watch the PGA Championship at Kiawah Island