The Walker Cup has become the ultimate endurance match as the U.S. leads GB&I by only two points

Home The Walker Cup has become the ultimate endurance match as the U.S. leads GB&I by only two points

JUNO BEACH, Fla. – The war stories from the 48th Walker Cup will be told for years. On a crusty, dehydrating day at Seminole Golf Club, players came in and out of both lineups – one even went to the hospital (for the second time this week) – and yet when the light turned golden on the edge of the Atlantic, all men were still on their feet.

“We’ve been thrown a bunch of punches from different directions,” said American Cole Hammer, who bookended the day with a pair of points for the U.S., “and we’ve handled it pretty well.”

Nothing has gone as scripted in these matches, from the stomach ailment that has swept through both teams to the tight score after the first day. The Americans are on favorable turf and a favorable spot on the calendar, yet after the first two sessions GB&I only trails 5-7.

“I was a nervous parent all day is what it felt like to me,” U.S. captain Nathaniel Crosby said.

Sitting next to Hammer while speaking to media in the setting sun, Crosby truly did get a bit parental. He insists he’s not known for nagging or pep talks. Grabbing a player by the ears is more his style.

When you’re 5 up (as Hammer was after nine holes), take it to 6 up (Hammer rather let opponent John Murphy back into the match before closing him on out on No. 17), Crosby preaches. And definitely carry the 62-degree wedge around a place with lies as tight and greens as fast as Seminole (to this, a Hammer wince).

Cole Hammer of Team USA celebrates with captain Nathaniel Crosby after winning his match against John Murphy during Saturday singles at the Walker Cup. (Photo by Cliff Hawkins/Getty Images)

It’s the kind of humor you need on a week when 18 of 24 combined players (made up of each 10-man team plus each team’s two alternates) are going down like flies. Crosby and opposing captain Stuart Wilson weren’t spared in that.

“It hit me really hard yesterday,” Crosby said when asked how difficult it might be to tee it up after being down for the count. “But I think it probably varies from person to person.”

Hammer is one of few who haven’t been afflicted. On the other side of the coin, reigning U.S. Amateur champion Tyler Strafaci hasn’t actually played a match yet, having turned over his afternoon singles spot to William Mouw with just a few minutes to spare.

It’s truly unfortunate for Strafaci, who coveted a spot on this team perhaps more than anyone. It was the chapter left unwritten by his grandfather Frank Strafaci, the 1935 U.S. Amateur Public Links champion.

After Strafaci returned from his second hospital visit this week, he walked around the back nine gingerly with his team – a cotton ball still taped to the inside of his right arm.

“It was tough. I mean, I wanted to go out and compete,” he said. “It’s what I’ve been preparing my whole life for. It wasn’t easy at all. Physically I just couldn’t have walked 18 holes today. I was just really out of it, and three IVs in, I feel much better now, so I’m ready for tomorrow.”

Mouw was ill early week but has recovered, and on short notice scored a point for the U.S. against Ben Jones. In Mouw’s mind, being prepared for long hot days at the start of the week will help them all get through another day.

“It takes a lot out of you, 36 holes, but if you’re mentally prepared, I think you’ll be just fine.”

John Pak was the man of the matches for the U.S. in 2019 as the only player to go undefeated. But after coming off the bench – or rather, out of the sick bay – to tee it up in the afternoon, Pak experienced his first Walker Cup loss.

Pierceson Coody was in a similar situation, having slept in late to recover as much as possible before going out in the first match again GB&I stalwart Alex Fitzpatrick. After being sick for much of the past 24 to 36 hours, Coody was surprised how light the club felt when he returned.

“It was tough when about five of us, Thursday night we were all looking at each other like, we’re going to the hospital. We can’t even lay in our beds,” he said. “it was a really weird feeling, it was a really down feeling for sure. Once everyone started off this morning, I think that mojo and those feels went away really fast.”

The highlight of Coody’s round came mid-way through the back nine, where he made birdie on No. 12 to tie Fitzpatrick.

“It gave me a lot of freedom to play the par 5s,” he said. Coody made back-to-back birdies on the long holes (Nos. 14 and 15) and successfully closed out Fitzpatrick with another birdie on No. 18. 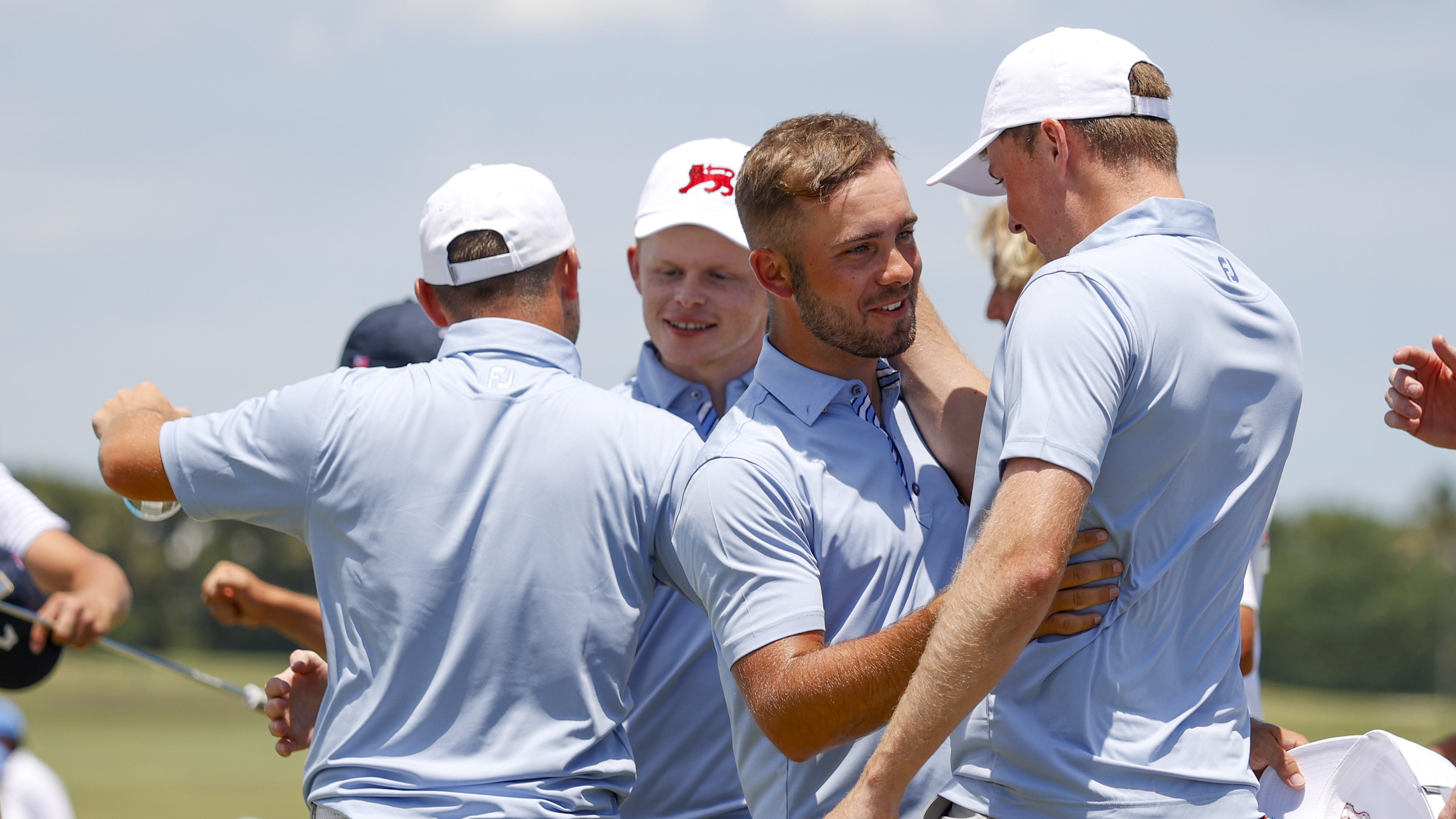 Jake Bolton is congratulated by his GB&I teammates during Foursomes at the 2021 Walker Cup at Seminole Golf Club in Juno Beach, Fla. on Saturday, May 8, 2021. (Photo: Chris Keane/USGA)

GB&I split morning foursomes 2-2 with the Americans. In the afternoon, Mark Power, Matty Lamb (like Mouw, a late sub-in for British Amateur champion Joe Long, who also hasn’t seen action this week) and Barclay Brown all got points.

GB&I captain Stuart Wilson was pleased with the morning result and feels his squad is still very much in this. The visitors need 13 ½ points to win the cup while the Americans just need 13 to retain. The last time GB&I won on foreign soil was in 2001 at Ocean Forest in Sea Island, Georgia.

“The singles this afternoon it was very, very close to finishing the day at 6-all, but unfortunately didn’t quite go our way towards the end there,” Wilson said, “but we’ve got an extra two points to play for tomorrow, and we still feel like we’re very much in it,” he said. 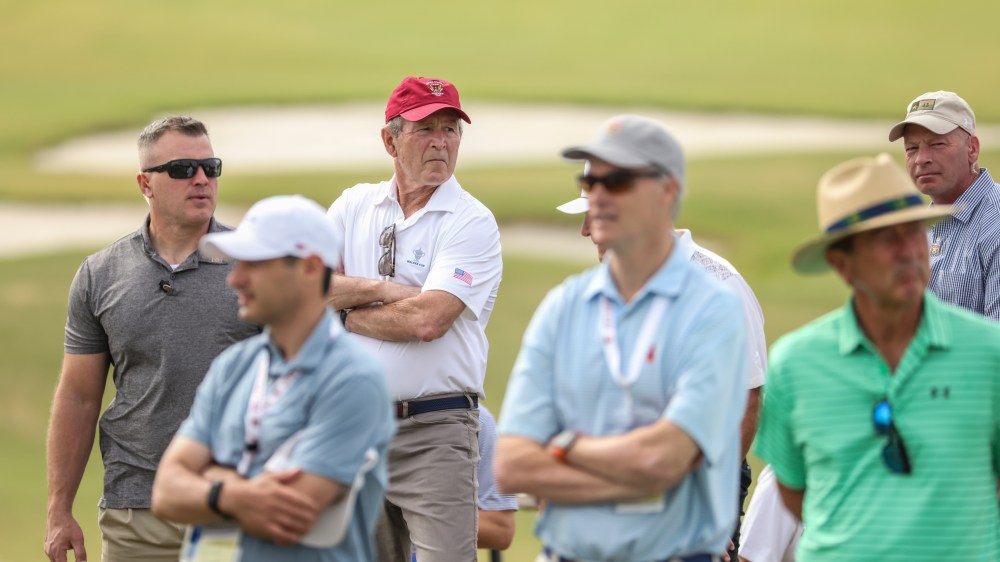