PINE VALLEY – This tiny borough, anchored by a members-only golf course considered one of the nation’s best, values its privacy.

Visitors arrive here to find a checkpoint that bars outsiders from Pine Valley Golf Club, an exclusive institution that makes up most of the one-square-mile community.

But the borough — with about a dozen residents in 19 golf-course homes — soon could consider a more outgoing approach.

A public question on the Nov. 3 ballot here will seek voter approval for a citizens’ commission to consider “possible shared services or consolidation opportunities for the borough.”

“This is a preliminary step, but an important one that the borough believes is prudent to consider,” Pine Valley Mayor Mike Kennedy said in a statement provided to the Courier-Post.

He noted the state government has encouraged municipalities “to consider merger opportunities in order to control costs and more efficiently administer services to its residents.”

The ballot question – to be decided by the borough’s 11 registered voters — is “consistent with these goals,” Kennedy said.

The Camden County borough, which was incorporated in 1929, keeps a low profile in a forested area behind a rail line along East Atlantic Avenue.

No sign welcomes people driving across the tracks and up a short road — little more than an oversized driveway — to a small municipal complex.

One cabin-like building serves as the borough hall. The police department, which has reported no major crimes for the past two years, occupies a smaller structure next door. 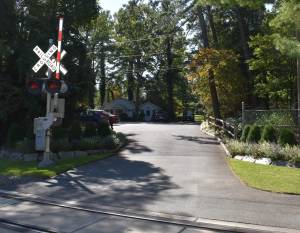 The golf course — as seen from the checkpoint — is a rolling terrain of fairways, greens, bunkers and woods.

During a recent visit by a reporter, a stream of luxury vehicles brought golfers from New Jersey, Pennsylvania and Virginia. Each stopped by a sign declaring the club’s private status and was cleared by a security guard in a Pine Valley golf shirt.

The course is typically open to the public on just one day each year — for restrained sight-seeing only.

That opportunity comes on the final day of the Crump Cup, a four-day competition for “mid-amateur” and senior golfers. The event is named for George Crump, a Philadelphia hotelier who began designing the course in 1913.

This year’s competition, initially scheduled for Sept. 24-27, was canceled due to the COVID-19 pandemic.

But the one-day opening drew almost 800 spectators in 2018, including four who were “evicted for tossing things onto the course,” according to minutes of a borough commission meeting from that time.

Most Crump Cup visitors are bussed about 1.5 miles from a parking lot at Clementon Park and Splash World, according to accounts of the event.

Gov. Phil Murphy has promoted shared services and consolidation as a way to reduce property taxes in a state with 565 municipalities.

He created a $10 million fund in September 2019 to help municipalities considering shared services and consolidation measures.

Pine Valley, with a 2019 municipal budget of $511,000 and no school district, already shares some services.

For instance, its clerk and deputy clerk hold the same posts in Laurel Springs, a larger borough just over two miles down the railroad tracks

The borough also has outsourced the positions of chief financial officer, construction officer and tax collector to Voorhees, according to a database maintained by the New Jersey League of Municipalities.

A state law declares it is “in the public interest to encourage contiguous municipalities to consider consolidation.” 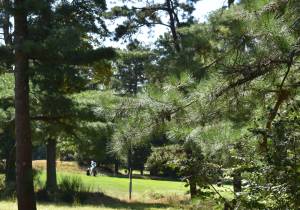 Pine Valley is adjacent to Pine Hill, with more than 10,000 residents in 4.1 square miles, and Clementon, with about 5,000 people in two square miles.

Pine Hill Mayor Christopher Green “is aware of the ballot question for Pine Valley,” John Greer, the larger borough’s business administrator, said Thursday. “However no discussions have taken place on any shared services or consolidation.”

Clementon Mayor Tom Weaver did not respond to a request for comment.

State Sen. James Beach, D-Voorhees, has proposed amending the municipal-merger law to allow consolidation of towns that are not contiguous.

According to the Pine Valley ballot question, the proposed citizens’ panel would be made up of members of the borough commission, “appropriate” municipal officials and “at least an equal number of residents.”

“Should the proposition pass in November, the Citizens’ Commission will be formed and it will begin its work,” the mayor said in his statement.

“Once that work is completed, the borough will evaluate the commission’s findings,” he said.