LA QUINTA, Calif. – One year ago, Tony Finau was just two shots off the lead of The American Express tournament after two rounds and staring at consecutive rounds on the Pete Dye Stadium Course in his search for a victory.

Finau shot rounds of 71 and 69 on the intimidating Stadium layout with its massive lakes and cavernous bunkers and drifted back to a tie for 10th, eight shots behind winner Andrew Landry.

This year, with two more rounds on the Stadium Course over the weekend for Finau and the rest of the field of The American Express, the 31-year-old Finau is hoping for a different ending.

“It’s a golf course that fits someone that hits it far,” said Finau, just one shot off the 36-hole lead held by 22-year-old South Korean Sungjae Im. “I can reach all the par-5s on the Stadium.”

But just avoiding Dye’s devilish bunkers off the tee won’t be enough for a victory this weekend in La Quinta, Finau admitted.

“As we know in this game, it’s going to come down to scoring and come down to putting, especially on this type of golf course,” Finau said. “I don’t think you’re going to hit too many balls out of bounds – you might hit some in the water – but ultimately the game comes down to who is going to make the most putts on the weekend, and hopefully that’s going to be me.”

Finau is one of several big names lurking around the lead after Friday, a cloudy and cool day that felt more like San Diego than the desert of the Coachella Valley.

Friday was the last day golfers played on two courses at PGA West. With a 36-hole cut – the first in the tournament’s 62-year history since only two golf courses are being used this week because of restrictions caused by the coronavirus pandemic – the format calls for the third and fourth rounds to be played on the Stadium Course.

Big pack behind the leader

Finau finds himself in a five-way tie for second behind South Korea’s Im, who is forging his own story at The American Express.

Im shot a bogey-free 7-under 65 on the Stadium Course on Friday, tied for the lowest score of the day, to reach 11-under 133. Like Finau, Im is hoping for better results on Sunday than he’s had at the tournament in recent years.

“I did finish 12th and 10th coming in here (the last two years),” said Im, the tour’s rookie of the year in 2019. “I feel comfortable playing at the American Express and visually from the tee box it’s a course that I really like and enjoy to play, so I feel really comfortable throughout the round. And the two courses that we’re playing this week (Stadium and Nicklaus Tournament at PGA West), I like those courses, and that’s what led me to a good score.”

Tied with Finau at 10 under are Nick Taylor, Abraham Ancer, Si Wood Kim and first-round leader Brandon Hagy. Hagy lost his lead early in the day, scrambled back on the Stadium Course to tie Im, but bogeyed the final hole of the day to fall into the second-place tie.

The day also featured a first for tournament host Phil Mickelson. The World Golf Hall of Famer recorded 18 pars in a round for the first time in his 2,201 career PGA Tour rounds. Mickelson, who played the Stadium Course, missed the cut by six shots. 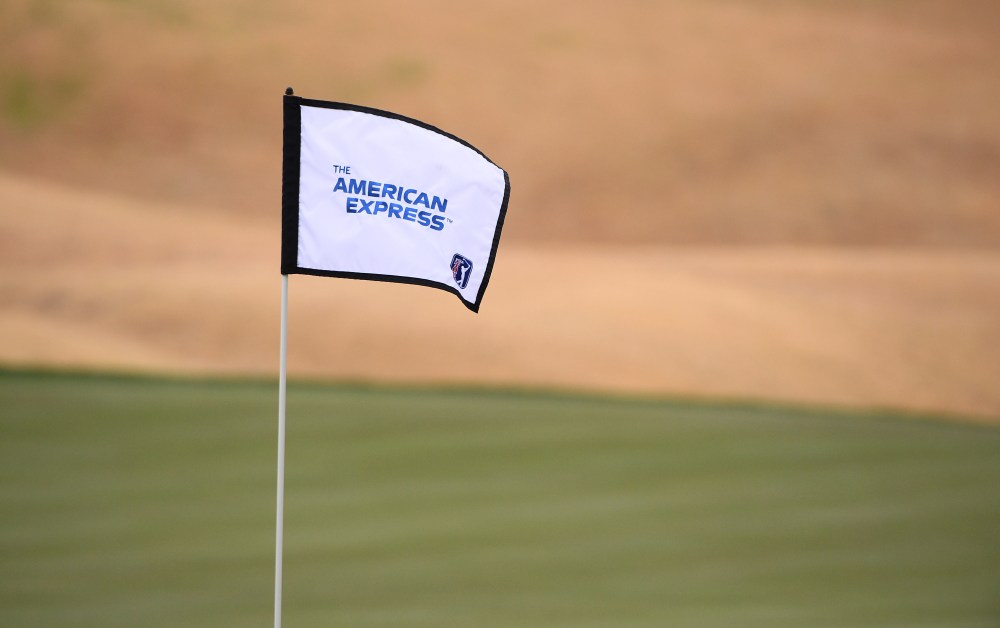 For Finau, who represents tournament sponsor American Express, Friday’s round on the Nicklaus Tournament Course brought back strong memories of the 62 he shot in the second round on the same course last year.

Ranked 22nd in the world rankings and one of 12 golfers in the field in the top 50 in the world, Finau played another solid round on the course, with six birdies in his first 13 holes. One of those birdies was unlikely, though, a holed bunker shot on the par-5 11th from a bunker so deep Finau could not be seen from the green.

“As soon as I hit it, I actually said, ‘Go in.’ I hit a perfect bunker shot,” Finau said. “So I think even if it doesn’t go in, it’s going to hit the flag and at least stay close. It was a really, really hard shot, bad error on the shot before, leaving myself in that position, but it’s always a bonus when you can do something like that and it ended up being huge for me.”

Focus on one course now

Abraham Ancer during the second round of The American Express tournament on the Jack Nicklaus Tournament Course at PGA West in La Quinta, California. (Sean M. Haffey/Getty Images)

Even playing his last five holes in 1 over didn’t dampen Finau’s enthusiasm for his play on the PGA West courses.

“Sometimes, adjusting to two different courses can create some problems, and I think speed-wise it was a little bit different on Nicklaus,” he said. “And that was the only issue, but again I was able to roll in at least a few.”

For Ancer, whose second-round 65 came on the Nicklaus Tournament Course, the weekend also represents a chance for a victory in a tournament he could have won in 2020. Ancer was tied with Landry at 24 under last year, but was in the clubhouse as Landry birdied the last two holes to leave Ancer in second place.

“Last year, last round, I played really, really well, shot 9-under. My buddy Landry clipped me there on the last two, which, it was cool, he made some awesome putts and great shots, Ancer said. “But I know what to do here, you just got to make birdies. Unless the wind picks up and if it gets a little colder, I mean the Stadium is a really good challenge.”

Nick Taylor has short game working, aiming to be second Canadian to win in desert