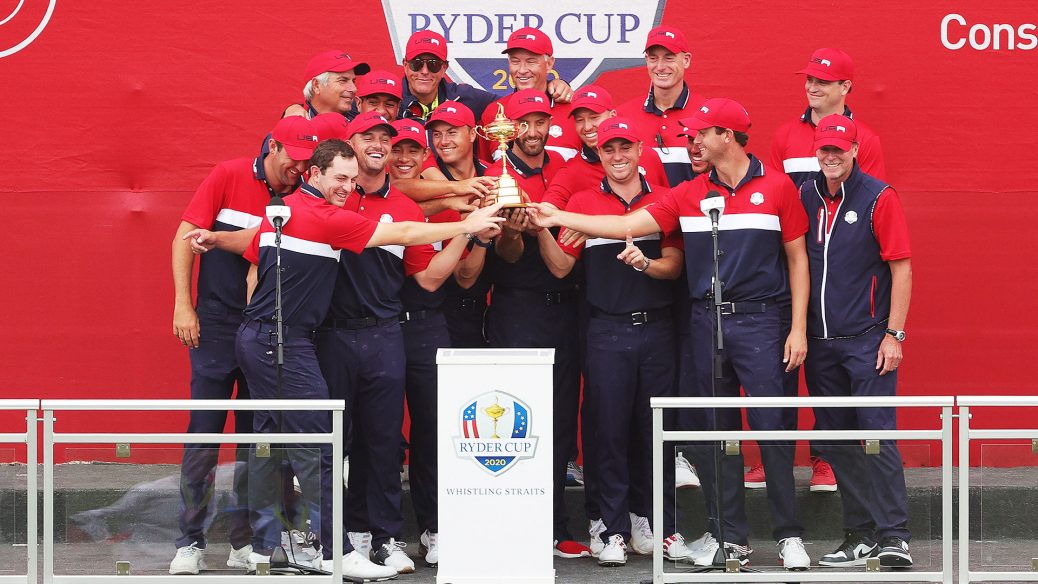 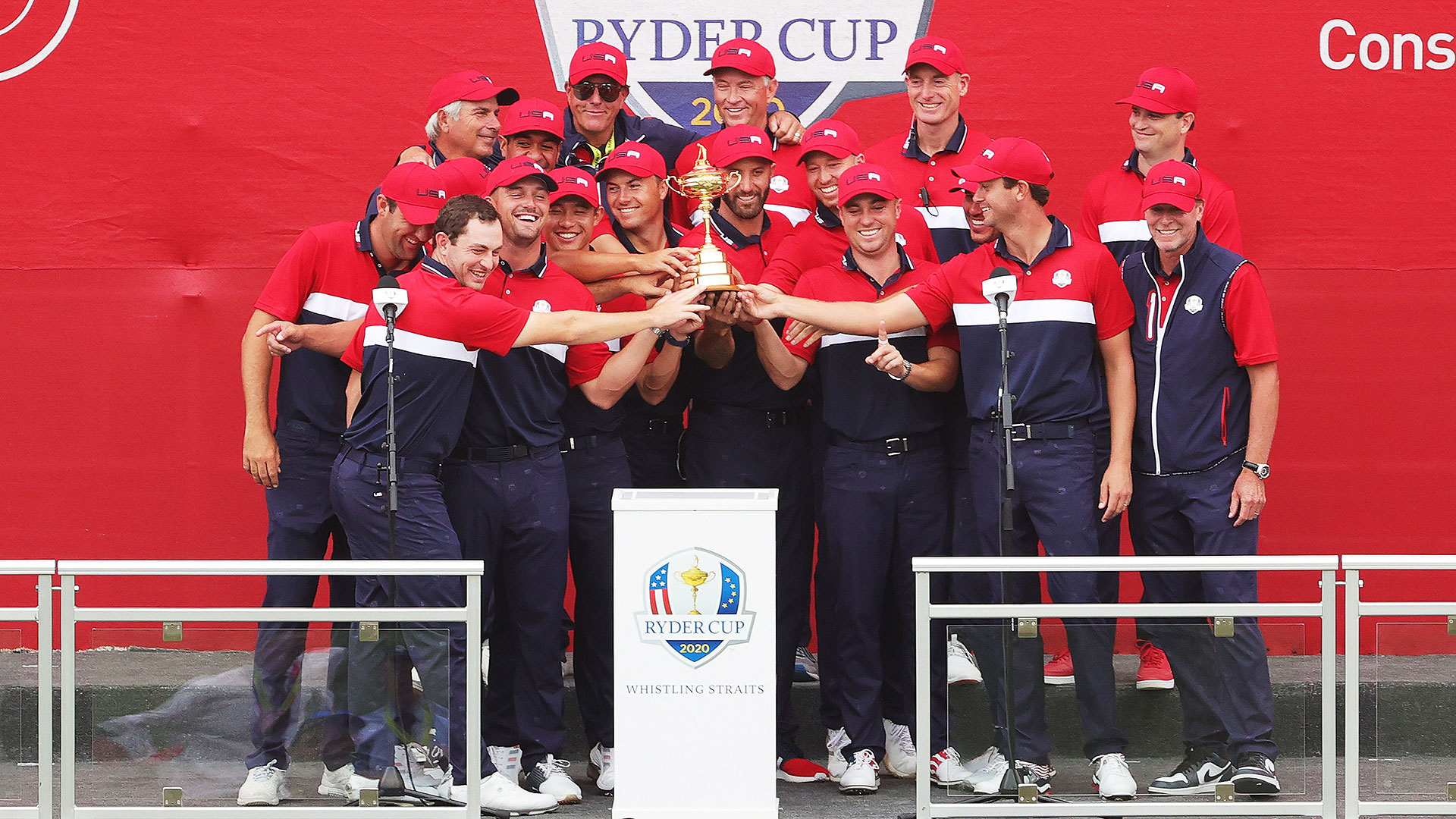 European Ryder Cup captain Padraig Harrington stood on the first tee Sunday morning at Whistling Straits, his team faced with an unprecedented task of making up an 11-5 deficit and keeping the home side from winning the three-and-a-half points needed to take back the cup.

“No one player can win nine matches, but all 12 players can win one match,” a somewhat hopeful Harrington told Golf Channel’s Steve Sands prior to the first tee ball being struck.

Ten-to-six leads had been surrendered before in the Ryder Cup, most recently in 2012, when the Europeans orchestrated the “Miracle at Medinah.” But never had an 11-5 advantages been coughed up. If Europe was to have any chance it needed to win early and often in singles – and at least nine matches to retain. So, it was no surprise that Harrington front-loaded his lineup, sending out a struggling-yet-experienced Rory McIlroy, Europe’s usual leadoff guy, followed by his three hottest players this week – Shane Lowry, Jon Rahm and Sergio Garcia.

It was a great idea, just poor execution.

No team had ever made up a six-point deficit on the final day, and the U.S. quickly shut down any inkling of such happening on Sunday. Shortly after all 12 matches got on the course, the Americans led in nine of them, and before the anchor between Daniel Berger and Matt Fitzpatrick reached the 13th hole, the U.S. had been guaranteed at least 14 1/2 points, enough to clinch its first Ryder Cup since 2016 and third since Europe began a 7-2 run in 2002.

“I don’t think it’s just a win, I think this is a dominant win,” said Collin Morikawa after the Americans’ record-breaking 19-9 result, the most lopsided victory in the modern cup era, was finalized.

While the 0-3 McIlroy, having sat Saturday morning for the first time in 27 career matches, finally showed up and got off to a hot start against Xander Schauffele, his teammates couldn’t follow suit. Lowry, energized by a huge winning putt on No. 18 a session prior, won the second hole against Patrick Cantlay, the FedExCup champ and PGA Tour player of the year, but Cantlay then won each of the next four holes, three of them with birdie. Rahm, 3-0-1 in his second Ryder Cup, lost each of the first four holes to birdies by American rookie Scottie Scheffler, who ranked 20 spots worse than the world No. 1. Garcia watched as Bryson DeChambeau hit his opening tee shot 354 yards and drove the first green to set up a 41-foot eagle make, which kickstarted a quick 2-up advantage.

Even European rookie Viktor Hovland, facing Morikawa in the fifth match, couldn’t maintain any momentum early. The affable Norwegian went 2 up after two holes, but he then dropped Nos. 4-7 to go 2 down.

McIlroy earned the first point of the day, for either side, dispatching Schauffele, 3 and 2, while carding five birdies – he had none (with one eagle) in two fourball matches this week.

“I should have done more for them this week,” McIlroy told Sky Sports, tearing up. “I just can’t wait to get another shot at this.” He continued to choke up in his NBC interview: “I have never really cried or got emotional over what I’ve done as an individual – I couldn’t give a s—. But this team, and what it feels like to be a part of, to see Sergio break records, to see Jon Rahm come into his own this week, to see one of my best friends, Shane Lowry, make his Ryder Cup debut, all that, it’s phenomenal and I’m so happy to be a part of it.”

Moments later, though, Scheffler put the finishing touches on a 4-and-3 victory over Rahm, and Cantlay soon followed with a 4-and-2 win against Lowry. DeChambeau closed out Garcia, 3 and 2, and Morikawa, one of six rookies on the U.S. team, earned the clinching half-point, sticking his tee ball at the par-3 17th hole to 2 feet and tapping in for birdie to go dormie on Hovland. (He’d later close out a tie with his former All-American counterpart.)

The Americans had won; now, it would be just a matter of by how much. Since 1979, when continental Europe was added to the Ryder Cup mix and the total points available were changed to 28, no team had earned more than 18 1/2 points.

“I woke up this morning and told the guys, let’s get to 20 points,” Cantlay said after winning his match. “I wanted to send a message.”

The U.S. did just that. It entered the week as the best American team ever – on paper, at least, with an average world ranking of 8.92 and cup-record nine top-11 players – and then they backed it up. Dustin Johnson, Brooks Koepka, Justin Thomas and Berger also won their matches as the U.S. took the singles, 8-4, and became just the third team since 1979 to not lose a session. Every U.S. player earned at least a point, while five Europeans didn’t even get a full point, three of them going winless.

“They got it right,” Harrington said. “Whatever their plan was, they got it right this week, and a strong team, played well, kept the momentum, and they would have been tough to beat at the best of times, let alone when they are at top form. It’s a great win for them.”

Johnson carded eight birdies in a 1-up win over Paul Casey, and the Americans’ oldest player, at just 37, finished the week as the only 5-0 player, and the first 5-0 American since Larry Nelson, who did so 42 years ago.

“Starting the week, if you had told me I was going to go 5-0, I probably would have said you were crazy,” Johnson said. “I didn’t think I was going to play five matches, but obviously it was a great week. The team played amazing. All of us came together and we only wanted to win it. I think we just wanted it a little bit more.

“… We all have one thing in common: we do not like to lose.”

Before these matches, the U.S. had plenty of doubters. Those critics said that they couldn’t get along, that were too many distractions, that the European team, with half the amount of rookies and 38-12 advantage in appearances, was too seasoned.

Well, look at the Americans now.

“I mean, Brooks and Bryson wanted to play together; that’s how much it came together,” Stricker said.

And that was before Koepka and DeChambeau, long embroiled in a personal beef with each other, were seen hugging in celebration.

“From Day 1, it was about out-preparing, right, getting the guys here, getting them on the same page,” Stricker added. “This is a new era for USA Golf. They are young. They come with a lot of passion, a lot of energy, a lot of game. They are just so good.”

And the Europeans, after digging a big hole, never really had a chance.