ORLANDO, Fla. – How badly were Virginia golfers itching to get started this season? Senior Beth Lillie joked she’d have ridden her bicycle the 800 miles from campus to Orlando to tee it up in the season-opening UCF Challenge if she had to. It’s that kind of thinking that figured heavily into Virginia’s gutsy performance down the stretch against ACC foe Wake Forest – a team that topped many a “favorites” list – for an early spring trophy.

Crave the hard days. That’s a mindset Virginia learned from Bob Rotella, a Charlottesville, Virginia-based sports psychologist with whom the team often works. Tuesday certainly fit into the category, with a biting Florida chill and strong wind gusts.

Scott encouraged her team to look at the final round as a clean slate. Virginia was 11 shots off Houston’s lead entering the final round, but last February, in the next-to-last tournament the team played before COVID shut down the spring season, the Cavaliers made up nine shots in nine holes to win the IJGA Collegiate Invitational, an event Scott hosted at Guadalajara Country Club, Lorena Ochoa’s home course.

It took four qualifying rounds back home in Charlottesville to set the UCF Challenge lineup. The weather was hit-and-miss. That was another experience to draw on. 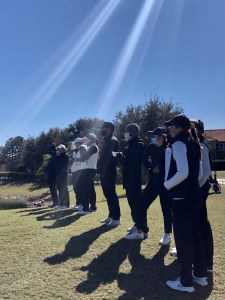 Virginia and Wake Forest players stand at the 18th green at the UCF Challenge.

“We woke up and we were like, it’s just like a qualifying day in Charlottesville,” Scott said. “We’ve had to qualify in pretty similar conditions and low temps over the last couple of weeks. We just kept feeding it to them that there’s no one more prepared for this than you. You’ve seen it, you’ve played in it.”

Virginia made the turn in 1 under on Tuesday to move to the top of the leaderboard, slightly ahead of Wake Forest and Houston. But the Cavaliers managed to play the back nine in even par to maintain the only under-par team score of the day. Even as Wake Forest counted nine back-nine birdies, Virginia was too far ahead and at 5 under total, won the tournament by one shot.

Sophomore Celeste Valinho, a native of Jacksonville, Florida, had been looking forward to this tournament. She couldn’t wait for warmer temperatures and Bermuda greens. As it turned out, she only got one of those things.

Valinho made the turn on Tuesday in 2 over, and was so frustrated with her play on the front nine – no putts falling and “some dumb pars” – that she wasn’t even focusing on the leaderboard. Valinho stopped worrying about making birdies and started thinking about hitting greens. She figured she’d go from there. She made eagle on the par-5 13th and birdied the par-5 18th for a closing 72.

“Everybody just stormed me – great putt, we’re in the lead,” she said of walking off No. 18. “That’s going to matter a lot.”

Ultimately it did, and Scott called Valinho the unsung hero of the week.

Valinho struggled to get through qualifying as a freshman, admitting that it was stressful for her. She’s done a better job approaching qualifiers as regular rounds, and she carried that thinking over to the UCF start. She’s also worked hard to control her body language.

“Everyone always told me your body language matters so much,” she said. “I was always like yeah, how does slapping your leg really matter that much? It really does.”

.@UVAWomensGolf has a one-shot edge on Wake Forest with last players on final hole. Team watching as Jennifer Cleary stuffs it on 18. pic.twitter.com/VEqHbD5K8H

No one – not even Lillie – is biking home from Orlando. The Cavaliers piled in the team van instead, which is how they’ll travel all spring. Lillie felt it was a win just getting to play the UCF Challenge, let alone bring home a trophy.

“It just shows all the work we have put in even when things are uncertain and unclear, which is such a testament to the team and everything,” she said.

Lillie won the Donna Andrews Invitational in June. She flew back to her Fullerton, California, home and since a top-10 finish at the Southern California Women’s Amateur in August, hasn’t teed it up in competition until this week.

“I did feel a little bit rusty the first day here,” she said. “Like ooh, gotta get back in the mindset. But it clicked back in the second day.”

Lillie relished going head-to-head with Wake Forest. The memory of Virginia’s Guadalajara comeback rang in her brain, too.

College golf is gearing up, but with an added COVID wrinkle: attestation forms

College golf blog: On the road to the NCAA Championship